A delegation from Kuwait's Land Force has officially received the first M1A2K main battle tank at a ceremony in the United States, the Kuwait Army General Staff Headquarters announced on 29 July. 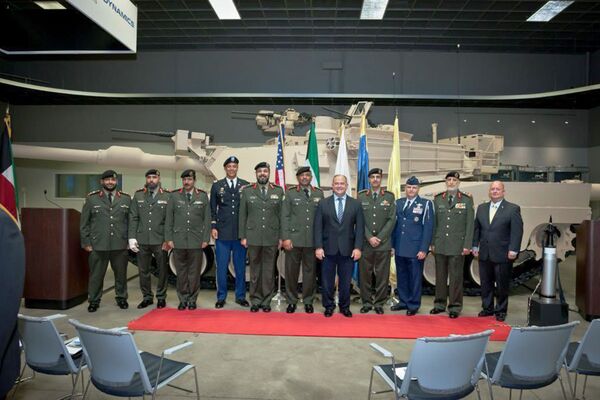 “The entry of the new tank into operational service soon will represent an enhancement of capabilities and an addition to the combat efficiency of the Kuwaiti Land Force,” it said in a tweet.

It released photographs and a video of the tanks to show that it has been fitted with an M153 Protector remote weapon station and the Counter Sniper Anti-Materiel Mount (CSAMM), which enables a .50 cal machine gun to be carried to the front right of the main gun.

Both these improvements were noted when the US Defense Security Cooperation Agency (DSCA) announced that Kuwait had requested upgrades for its 218 M1A2 tanks in December 2016. Kuwait subsequently decided to buy additional tank hulls rather than upgrade its existing ones.

The first contract for the new Kuwaiti tanks was announced by the US Department of Defense in December 2017. Awarded to General Dynamics Land Systems, it covered the design, development, and production of a “unique” Abrams variant for Kuwait.

A contract modification in August 2020 indicated that the delivery schedule had slipped as it gave the new estimated completion date as 30 June 2022.

A delegation from Kuwait's Land Force has officially received the first M1A2K main battle tank at a ...