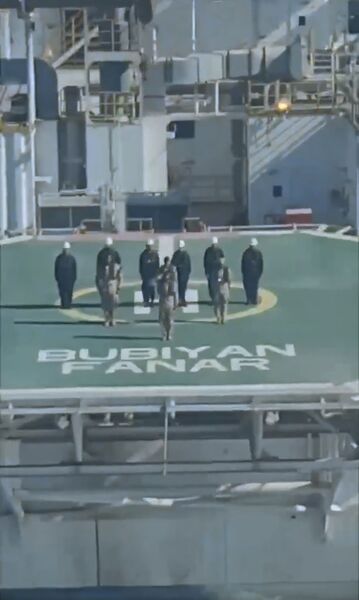 A still from a video clip released on 21 September 2021 shows personnel on the Bubiyan Fanar platform saluting as the Kuwaiti defence minister flies by in a helicopter. (Kuwait Army General Staff Headquarters)

Kuwait appears to have formally opened an offshore platform that has provoked Iraqi complaints.

A video released by the US Navy's 5th Fleet on 8 June said its commander, Vice Admiral Brad Cooper, attended a ribbon cutting ceremony for a maritime traffic co-ordination centre during a recent visit to Kuwait. “The centre serves as an offshore navigation facility for regional maritime traffic,” it said.

A model of an offshore platform with the name Babiyan Fanar on its helipad was displayed during the ceremony.

The actual Babiyan Fanar platform was seen in a video clip released in September 2021 by the Kuwaiti military, which said it was operated by the Kuwait Naval Force.

At the time, Janes used satellite imagery to confirm this is the platform that Iraq has said Kuwait began building in 2017 in violation of the 2014 agreement on navigation in the Khawr Abdullah estuary that is used to access Iraq's Umm Qasr Port. It is located close to the median point between Kuwait's Bubiyan Island and Iraq's Al-Faw Peninsula.

“Under international law, no such facilities can be established until the boundaries between the two states concerned have been delimited and demarcated, so as not to change the geographical status of those areas,” Baghdad told the UN Security Council in August 2019.

Kuwait responded that it had built the platform inside its unilaterally demarcated territorial waters to monitor ship movements and provide a persistent security presence in the estuary.

Kuwait appears to have formally opened an offshore platform that has provoked Iraqi complaints.