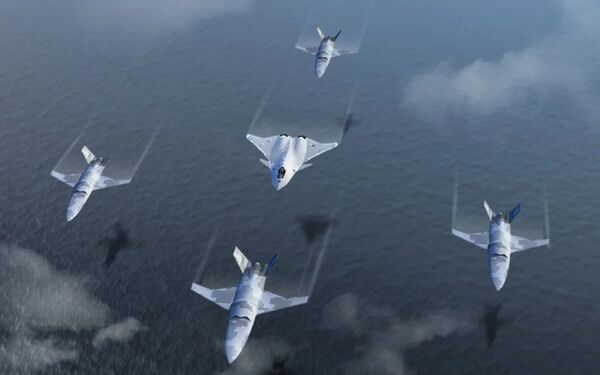 Korean Air will be involved in a programme to develop a squadron of UAVs or ‘loyal wingmen' to support manned fighter aircraft. (Korean Air)

Korean Air has been selected as the preferred bidder to develop “stealth” unmanned aerial vehicles (UAVs) for use by combat squadrons.

In an announcement on 16 August, Korean Air said it received “high scores” from the Korean Agency for Defense Development (ADD) for its technology in the first stage of the bidding process. The company is said to have been selected on 12 August.

South Korea has been developing the concept of a stealth UAV squadron as part of the ADD's ‘Future Challenge Defense Technology R&D Project'. ADD is said to have started the project in November 2021.

According to Korean Air, ADD has completed the basic design. ADD is scheduled to work with Korean Air to conduct a detailed design of the UAV platform, the company added.

For the programme, Korean Air has been entrusted to develop the manned-unmanned teaming system. This system is to enable one manned aircraft to be linked to between three and four stealth UAVs during operational missions, the company said.

The platform has been tentatively named as the Korean Unmanned System-Loyal Wingman (KUS-LW), according to images of the concept model shared by Korean Air.

“The squadron of UAVs will not only support and escort a manned aircraft, but will also be able to perform its own missions including surveillance, electronic interference tactics, and precise shooting,” Korean Air said.

Korean Air has been selected as the preferred bidder to develop “stealth” unmanned aerial vehicles (...