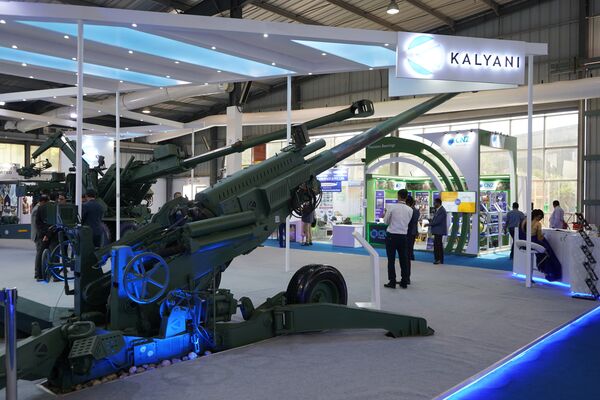 KSSL showcased 155 mm/52 calibre MAG-ER in India's Defence Expo 2022. According to the company, MAG-ER weighs less than 8 tons and has a firing range of 41 km. (Janes/Kapil Kajal)

MAG-ER is an upgraded version of the 155 mm/39 calibre ULH known as the mountain artillery gun (MAG) developed by KSSL in 2020.

According to KSSL, MAG-ER weighs less than 8 tons and has a firing range of 41 km. The howitzer operates at an elevation of 3°–72°. The speed of MAG-ER is 60 km/h in towing condition on blacktop and 24 km/h in cross-country terrains.

The intense rate of fire of the gun is 12 rounds in 3 minutes, and the sustained rate of fire is 42 rounds in 60 minutes. According to KSSL, the gun equips a digital fire control and can be deployed in high mountain areas.

Rahul Bhilare, manager at KSSL, told Janes that the proof-firing trials of the MAG-ER are going on with the Indian Army, and the company is expecting an order from the service soon.

Another artillery that the KSSL developed is Bharat 52, which weighs around 15 tons. According to the KSSL, the gun fires all NATO-standard and in-service ammunition.

Bharat 52 is equipped with an automatic ammunition load-assist system and a steer-by-wire control system for self-propelled mode.