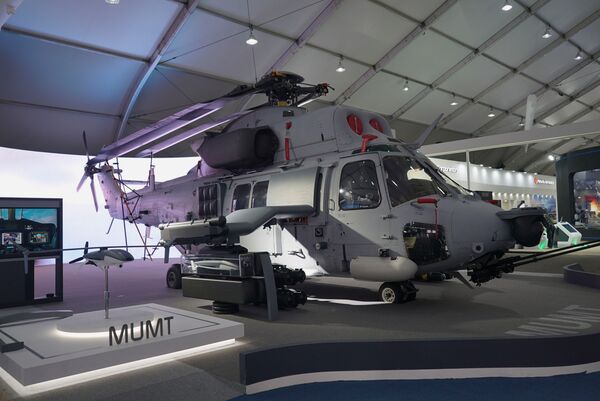 At ADEX 2021 KAI displayed a Surion MAH model fitted with an enlarged stub wing-type structure mounting four canisters, each of which is designed to launch either a small UAV or a loitering munition. On 27 October the company announced it had secured a contract to develop an MUM-T capability for locally developed helicopters in service with the RoK military. (KAI)

Korea Aerospace Industries (KAI) has secured a KRW4 billion (USD3.4 million) contract from the Defense Acquisition Program Administration (DAPA) in Seoul to fast-track the development of a new manned-unmanned-teaming (MUM-T) system for use by locally developed helicopters in service with the Republic of Korea (RoK) military.

The company announced the signing of the contract on 27 October, noting that the development project will last 14 months, with a completion date set for December 2022.

“If the MUM-T technology is added to domestically developed helicopters such as the Surion and the LAH [Light Attack Helicopter], it will enhance the country's fighting capabilities, ensure that the lives of RoK personnel are protected, and increase the export competitiveness of domestic helicopters”, said a KAI spokesperson, adding that the company expects to develop the technology through continuous research as well as co-operation with the government, industry, academia, and research institutes.

The company said a Surion helicopter will be the platform used to develop and test the new capabilities, which will include a command-and-control (C2) system that allows the helicopter to directly control unmanned aerial vehicles (UAVs). It will also feature imagery-receiving antennas to ensure pilots get real-time images from the UAVs in the cockpit.