Korea Aerospace Industries (KAI) is planning to develop a new ‘smart factory’ to support the production of its new KF-21 Boramae fighter aircraft.

In a filing to the Korean stock exchange on 22 April, KAI said it will invest KRW98.5 billion (USD88 million) over the coming five years to set up a “smart manufacturing system based on 4th Industrial Revolution digital technologies” including artificial intelligence and big data analytics.

The smart factory, it said, will be utilised across several projects. One of the initial focus areas is expected to be the production of components and structures for the KF-21, a prototype of which KAI unveiled earlier in April under its Korean Fighter eXperimental (KF-X) programme. 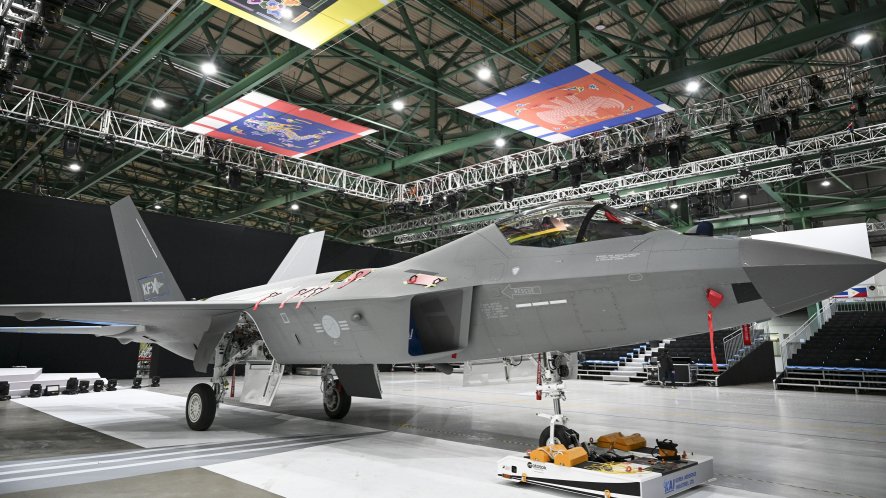 Korea Aerospace Industries (KAI) have announced plans to set up a ‘smart manufacturing’ facility to support the production of the KF-21 fighter aircraft, which was unveiled earlier in April. (DAPA)

KAI also expects to integrate the facility into a larger automated production ecosystem within South Korea’s aerospace sector. KAI said it will provide assistance to suppliers in setting up similar processes.

The plant, KAI said, will be partly modelled on its ‘A350 factory’, which was opened in 2010 at KAI’s headquarters in Sacheon, South Gyeongsang, to support production on the Airbus jet airliner.

This facility features automated production lines and has been credited with reducing A350 aerostructure manufacturing timeframes by 66%.

KAI also said that the facility will support its efforts to enhance the competitiveness of its products in export markets.

Commenting on the new factory, a KAI official quoted by local media said, “We will maximise work efficiency by implementing an intelligent production system that combines digital and analysis tasks performed in areas such as production, process management, technology, purchasing, and quality control.”

Korea Aerospace Industries (KAI) has outlined plans to expand through investments over the next few ...

The Hyundai Heavy Industries (HHI) group has attributed losses in fiscal year (FY) 2020 to factors i...

South Korea’s Hanwha Aerospace announced on 13 January that it will acquire a 30% stake in local fir...
Request Consultation