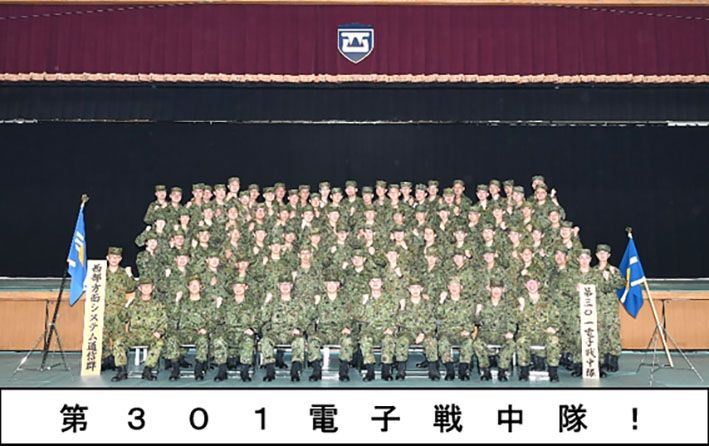 The JGSDF activated a new EW unit on 29 March to enhance its ability to defend Japan’s remote southern islands. (JGSDF)

The unit, named the 301st Electronic Warfare Company, was officially activated in a ceremony at the camp on 29 March, JGSDF officials told Janes. The company, which is under the command of the Western Army, comprises about 80 personnel and operates the recently developed truck-mounted Network Electronic Warfare System (NEWS).

The system is comprised of several specially equipped EW vehicles designed to perform electronic reconnaissance and degrade the command, control, and communication (C3) networks of adversaries.

One of the unit’s main tasks will be to detect and identify enemy naval and airborne communication and radar emissions. It will then use this information to jam enemy radar and missile seekers, while protecting the JGSDF’s own communication links.

The new unit will work closely with the Amphibious Rapid Deployment Brigade (ARDB) at Camp Ainoura in Sasebo, which is also on Kyushu Island. The ARDB was launched in March 2018 to enhance Japan’s capabilities to defend the Nansei Islands in the southwest, including the Senkaku/Diaoyu Islands in Okinawa Prefecture, which are controlled by Japan but also claimed by China and Taiwan.

The JGSDF said it plans to establish six more EW units across the country during the next fiscal year (starting on 1 April), namely at Camp Rumoi in Hokkaido; Camp Asaka, which is located at the boundary between Tokyo and Saitama; Camp Ainoura in Nagasaki; Camp Amami in Kagoshima; and Camp Naha and Vice-Camp Chinen on Okinawa.