JASDF aircraft intercepted foreign aircraft over a 1,000 times in 2021 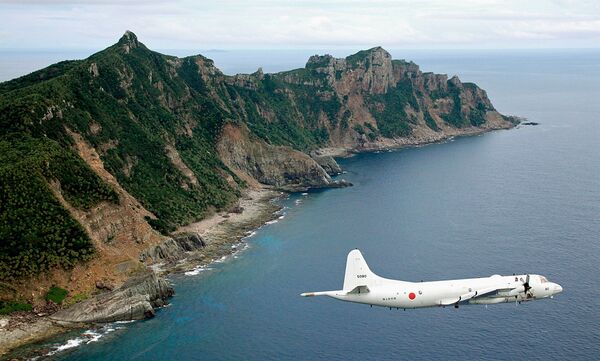 A Japanese P-3C Orion surveillance plane flies over the main island of the disputed Senkaku-Diaoyu archipelago. The uninhabited islands have become a focal point for Japan-China military flights. (PA)

Data released by the Japanese Ministry of Defense (MoD) on 15 April shows that the scrambles constituted a 38% increase compared with FY 2020. The latest figures are second to a record high of 1,168 JASDF scrambles conducted in FY 2016.

According to the MoD, JASDF fighters responded 722 times to movements by Chinese aircraft. This comprises 72% of all scrambles. The MoD added that this is the second-largest yearly total, following 851 scrambles in 2016.

Miyako Strait is a strategic gateway into the western Pacific. It spans the sea between Japan's Miyako and Okinawa islands.

In comparison, JASDF conducted only four air interception operations in the strait in FY 2020.

The minister said that “intensified” Chinese activities partly reflect “intelligence gathering”. He added that Chinese intrusions included a “diversified and sophisticated” range of aircraft, including the Shaanxi Y-9 intelligence-gathering aircraft. The JASDF had intercepted this aircraft for the first time on 23 March 2020 over the East China Sea.