Mitsubishi Heavy Industries (MHI) is partnering with Japan’s Acquisition, Technology & Logistics Agency (ATLA) to develop hypersonic missile systems for the Japan Self-Defense Forces (JSDF), it has been confirmed to Janes .

A spokesperson from ATLA – an agency under the Ministry of Defense (MoD) – said the collaborative projects are geared towards meeting technology development milestones by the mid-2020s.

MHI’s Research & Innovation Center in Nagasaki operates a hypersonic wind tunnel, which is capable of simulating speeds beyond Mach 5. MHI has not commented on its related projects with ATLA, however. 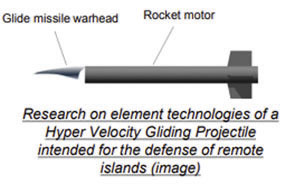 Japan’s ATLA is collaborating with MHI on developing a hypersonic glide weapon for the JSDF. (ATLA)

The ATLA spokesperson said ATLA’s Air Systems Research Center (ASRC) has recently contracted MHI to “establish some elemental technologies” in the programme to develop a system ATLA refers to as a Hypersonic Cruise Missile (HCM). The research phase of this project, which started in fiscal year (FY) 2019, is initially focused on developing the HCM’s scramjet engine.

In another project, dubbed the Hyper Velocity Gliding Projectile (HVGP), the spokesperson said ATLA’s Joint Systems Development Division (JSDD) has contracted MHI to commence research activity, although no details were provided. The JSDD commenced research of technologies for the HVGP in FY 2018.

The spokesperson said that ATLA currently expects the HVGP to be inducted into the JSDF from 2026. A modified and improved version is expected to be introduced in the early 2030s. The spokesperson also said that technology development of the HCM is “scheduled to continue until 2025” but that it is currently “not assumed” that the weapon will be inducted into the JSDF.

The Australian Department of Defence (DoD) is expanding partnerships with local industry and academi...