Named Etajima (with pennant number MSO 306), the 67 m-long boat was inducted into the service’s Minesweeper Division 3 at the Kure naval base in Hiroshima Prefecture shortly after being handed over by shipbuilder Japan Marine United (JMU) Corporation, which also built the other two ships of the class. 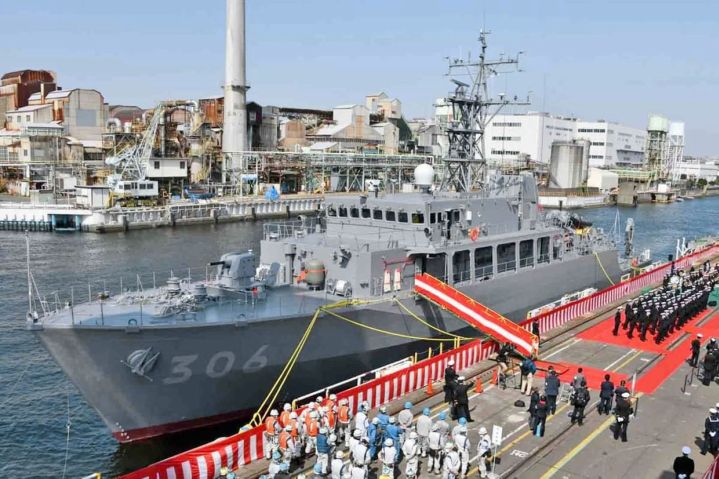 The JMSDF commissioned Etajima , its third Awaji-class MCMV, in a ceremony held on 16 March in Yokohama City, Kanagawa Prefecture. (JMSDF)

Etajima was laid down in February 2018 and launched in December 2019. A JMSDF spokesperson told Janes that the vessel was constructed for JPY17.7 billion (USD162 million) under a contract awarded in 2017.

The service was allocated about JPY12.6 billion (USD118 million) in fiscal year 2020 to build the fourth vessel of the class, which is expected to be launched in 2022 and commissioned in March 2024.

According to the JMSDF, the Awaji class has a crew complement of around 60, a standard displacement of 690 tonnes, a beam of 11 m, and a draught of 5.2 m. Each of the vessels in service is powered by two diesel engines of 2,200 hp each, and has a stated top speed of 14 kt.

The hull of these platforms has been built using a composite fibre-reinforced plastic material to help reduce weight as well as their magnetic signature during minesweeping operations. The material is also highly corrosion-resistant, according to the JMSDF.

A JMSDF spokesperson told Janes that the Awaji-class vessels are expected to be in service for more than 30 years while wooden-hulled minesweepers have a service life of about 20 years.