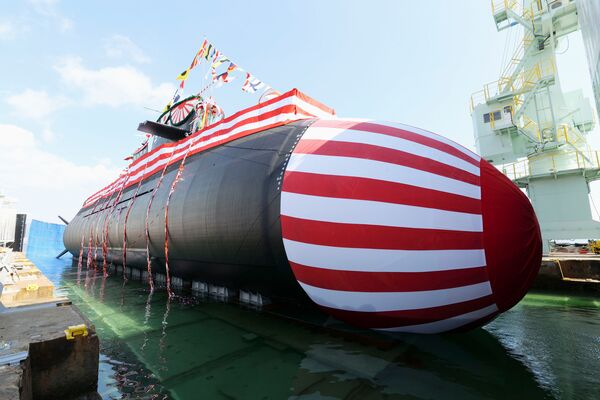 Taigei , seen here at its launch ceremony in October 2020. The vessel was commissioned in March 2022. (Japanese Air Self-Defense Force)

The Japan Maritime Self-Defense Force (JMSDF) has commissioned the first vessel in a new class of diesel-electric submarines (SSKs) with better underwater endurance than its predecessors.

The boat, which has been named Taigei with pennant number SS 513, was commissioned on 9 March at Mitsubishi Heavy Industries‘ (MHI's) shipyard in Kobe, said the JMSDF in a statement published via an official social media channel on the same day.

Taigei is powered by two Kawasaki diesel engines and it can reach a top speed of 20 kt. It is equipped with six 533 mm tubes and is expected to field a new heavy torpedo variant known as the Type 18, in addition to the Type 89.

Additionally, Taigei has been designed with reduced electro-magnetic and acoustic features, and will be equipped with a new combat management system (CMS), the details of which have not been released by the JMSDF.

The Japan Maritime Self-Defense Force (JMSDF) has commissioned the first vessel in a new class of di...