Named JS Toryu (with pennant number SS 512), the 84-m-long boat was inducted into the Escort Division 6 of Escort Flotilla 2, which is homeported at the Yokosuka naval base in Kanagawa Prefecture, shortly after being handed over by shipbuilder Kawasaki Heavy Industries (KHI) at its facility in Kobe.

It is the sixth submarine of the class built by KHI, with the other six having been constructed by Mitsubishi Heavy Industries (MHI). Toryu, which is also the second boat of the class to be equipped with lithium-ion batteries, was laid down in January 2017 and launched in November 2019. 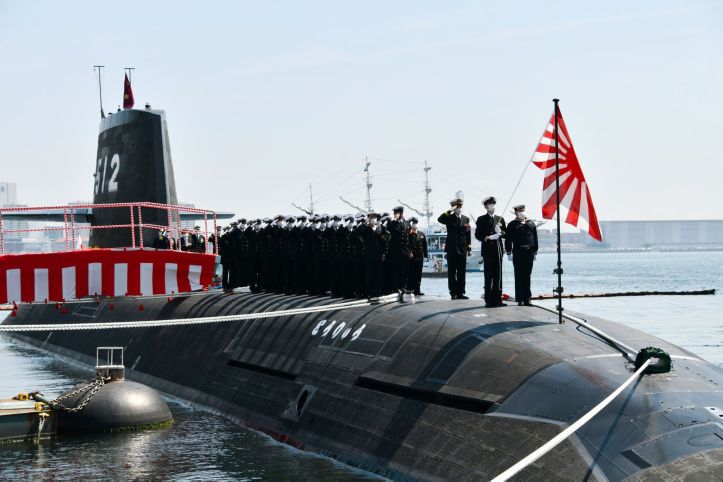 The JMSDF commissioned Toryu , its 12th and final Soryu-class SSK, in a ceremony held on 24 March in Hyogo Prefecture in west-central Japan. (JMSDF)

The total procurement cost of the submarine was about JPY69 billion (USD635 million), a JMSDF spokesperson told Janes.

The commissioning comes after GS Yuasa, a Kyoto-based developer and manufacturer of battery systems, announced in February 2017 that Japan would become the first country in the world to equip SSKs with lithium-ion batteries in place of lead-acid batteries.

According to Janes Fighting Ships, the Soryu class has a beam of 9.1 m, a hull draught of 8.4 m, and a displacement of 2,947 tonnes when surfaced and of 4,100 tonnes when submerged.

The previous boats of the class have been fitted with two Kawasaki 12V 25/25 diesel generators and four Kawasaki Kockums V4-275R Stirling air-independent propulsion (AIP) engines, and use lead-acid batteries for energy storage.