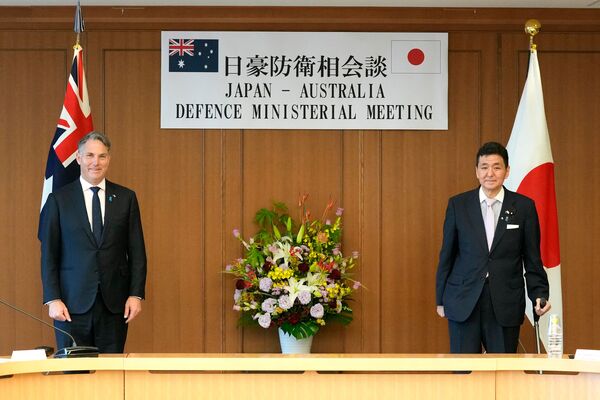 Australian Defence Minister Richard Marles and his Japanese counterpart Nobuo Kishi pose for a photo before their Japan-Australia bilateral defence meeting at the Japanese Ministry of Defense in Tokyo on June 15, 2022. (Kyodo News via Getty Images)

Japan and Australia are planning to expand bilateral defence co-operation to be better equipped to respond to the common security challenges in the Asia-Pacific, the defence ministers of the two countries – Nobuo Kishi and Richard Marles – said in a joint statement on 15 June.

According to the joint statement, the two countries will be increasing co-operation in the cyber and space domain, science and technology, and strategic capabilities; collaborating on supply chains to strengthen “mutual industrial bases”; and enhancing “exercises and activities in each domain” to augment the interoperability of military forces.

The Australian Department of Defence (DoD) “will increasingly engage with Japan on priority strategic capabilities, including space, integrated air and missile defence, and cyber”, a spokesperson for the DoD told Janes .

“These engagements include policy exchanges, capability co-operation, and technical collaboration”.

The joint statement also underlined plans to accelerate the development of a framework to promote science and technology co-operation between Australia's Defence Science and Technology Group (DSTG) and Japan's Acquisition, Technology and Logistics Agency (ATLA).

Japan and Australia are planning to expand bilateral defence co-operation to be better equipped to r...