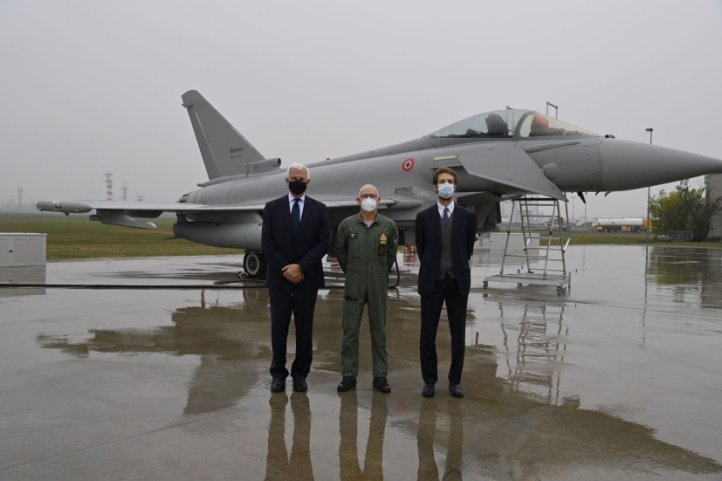 Italy’s 96th and final Eurofighter was delivered to the air force during a ceremony at Leonardo’s Caselle facility near Turin. (Leonardo)

Leonardo announced the milestone on 23 October, with the Tranche 3 aircraft being delivered to the Italian Air Force (Aeronautica Militare Italiana: AMI) from its plant in Caselle near Turin was the most advanced.

“The delivery of the last aircraft, which completes the Eurofighter fleet, is the main asset of a complex and diversified national and NATO air-defence system, is a major programme milestone,” AMI Chief of Staff, Lieutenant General Alberto Rosso, said at the handover ceremony of the aircraft, which is destined for the Italian Air Force’s 51st Wing Istrana Air Base.

With this handover, Italy now has a fleet of 96 Eurofighters. The other core nations of Germany, Spain, and the United Kingdom have each received 143, 73, and 160 aircraft respectively, completing their PoRs through to Tranche 3A. Export nations Austria, Oman, and Saudi Arabia have received 15, 12, and 72 aircraft respectively, while Kuwait and Qatar are still due to receive the 28 and 24 aircraft that they have ordered. The national production lines at Warton in the UK, Manching in Germany, Caselle in Italy, and Getafe in Spain will continue to manufacture parts for these customers, with final assembly taking place at Warton for Qatar and at Caselle for Kuwait.

In total, 623 Eurofighters have been ordered by the nine nations, of which 571 have been delivered.