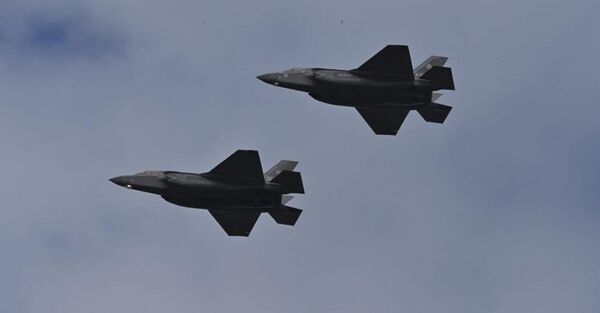 An air force and a navy aircraft flying together during a combined exercise that was geared at integrating Italy's F-35B assets into a joint force. (Italian Ministry of Defence)

Italy is progressing towards a joint force concept for the operation of its fleet of Lockheed Martin F-35 Lightning II Joint Strike Fighters (JSFs), with the Italian Air Force (Aeronautica Militare Italiana: AMI) and the Italian Navy (Marina Militare: MM) holding a combined exercise on 27 January.

According to the Ministry of Defence (MoD), the air force and navy conducted the joint manoeuvres at the Pantelleria Airport Detachment on the Italian island of Pantelleria.

“Today's training event is fully part of the development process of joint forces, strongly supported by the Minister of Defence Lorenzo Guerini, and has sanctioned a further step forward in the integration process of fifth-generation multirole aircraft,” the MoD said on 27 January, adding that the exercise was aimed at increasing the expeditionary capacity from the ground through the use of an austere base not suitable for the flight operations of conventional take-off aircraft.

Italy is set to field 30 F-35Bs, which have been operated separately and distinctly as two fleets until now, with both the AMI and the MM to receive 15 aircraft apiece (separately, the AMI is also to receive 60 F-35As). As the MoD noted, the current F-35B integration process was launched with AMI and MM F-35Bs recently operating together from the Italian aircraft carrier Cavour and the British Royal Navy aircraft carrier HMS Queen Elizabeth .

Italy is progressing towards a joint force concept for the operation of its fleet of Lockheed Martin...