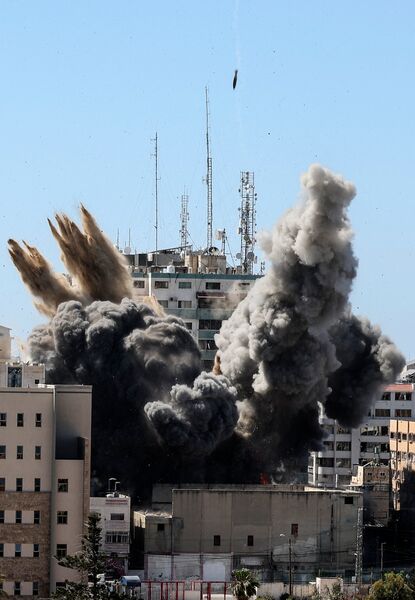 A munition hits the Al-Jalaa Tower in the Gaza Strip as a second guided bomb descends towards the building on 15 May. (Mahmud Hams / AFP via Getty Images)

The Israeli Air Force destroyed the 12-storey building, which housed the Associated Press and Al-Jazeera offices, on 15 May during Operation ‘Guardian of the Walls' against Hamas and the Palestinian Islamic Jihad.

“The site was used by the Hamas terror organisation for intelligence research and development [R&D], and to carry out SIGINT [signals intelligence], ELINT [electronic intelligence], and EW operations targeting both IDF operational activity and civilian systems in Israel. One of the main goals of these efforts was to develop a system that would disrupt the Iron Dome aerial defence system,” the IDF said in a statement.

“The purpose of the IDF strike was to curtail these enemy capabilities, including destroying special equipment, and preventing their use during the operation,” the statement added. “According to IDF assessments, the equipment was in the building at the time of the strike. The strike was designed to collapse the building in order to ensure the destruction of the special means.”

The IDF has faced international criticism for attacking press freedom even though the strike caused no casualties as it warned occupants to evacuate about an hour before.

Hamas officials have denied the group had a presence in the building and the Associated Press has said it was unaware of the alleged presence and had not been shown any evidence of it by Israel.

The Palestinian militant group Hamas used the Al-Jalaa Tower in the Gaza Strip for electronic warfar...