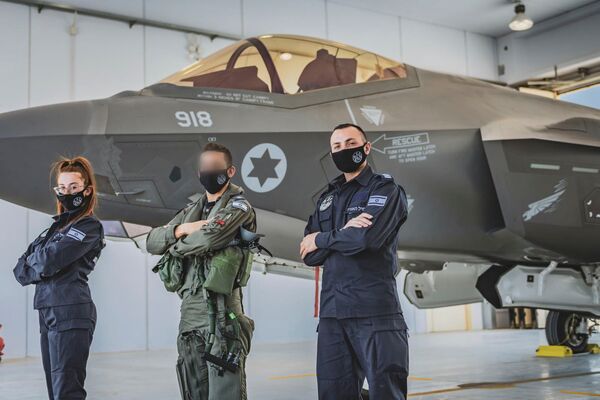 IAF personnel pose in front of one of six F-35I Adir aircraft that have been deployed to Italy for the service's first overseas exercise using the type. (Israeli Air Force)

“Our ‘Adir' Division has recently touched down in Italy as part of its first-ever overseas deployment and will begin training alongside our friends from the AMI, RAF, and the USAF,” the IAF said on its official Facebook page. “Throughout the exercise, the IAF will drill a wide variety of operational scenarios to enhance the operational capabilities of the F-35 while strengthening international co-operation”.

Aimed at increasing allied interoperability between fifth-generation aircraft such as the F-35 and other fourth-generation aircraft, ‘Falcon Strike 2021' is running from 7 to 15 June. The international F-35s will act as the ‘blue force', operating against a ‘red force' of other AMI aircraft types. According to Israeli national media reports, the IAF is also contributing a Gulfstream G550-based ‘Eitam' airborne early warning and control (AEW&C) aircraft and a pair of Boeing KC-135 ‘Reem' tankers. The AMI is said to be contributing a Boeing KC-767 tanker and a G550 AEW&C aircraft, while the RAF is operating an Airbus A330 Voyager tanker.