Israeli Air Force touches down in Germany for first time

The Israeli Air Force (IAF) deployed combat aircraft to Germany for the first time in its history on 17 August. 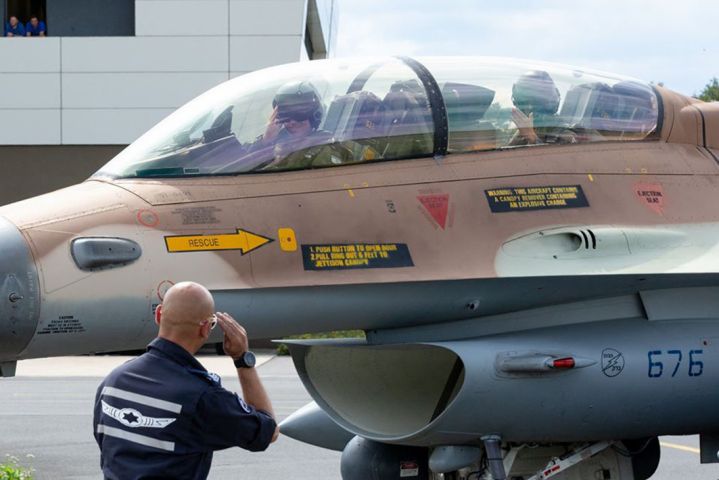 IAF F-16D crewmembers are greeted by an Israeli ground handler on their arrival into Germany for the first time in Israel’s history. (Luftwaffe)

Six Lockheed Martin F-16C/D Barak multirole fighters, accompanied by support and liaison aircraft as well as 180 personnel, arrived at the Tactical Air Force Wing 31 ‘Boelcke’ in Nörvenich, southwest of Cologne, for the first ever bilateral training exercise between the IAF and the Luftwaffe. Exercise ‘Blue Wings 2020’ will see the IAF F-16s train alongside Luftwaffe Eurofighters over the coming two weeks,

“At the invitation of the Inspector of the [German] Air Force, Lieutenant General Ingo Gerhartz, said both air forces will practice joint air operations during the first week at ‘Blue Wings’. In the second week, the Israeli partners take part in the Multinational Air Group Days (MAG Days), which take place several times a year,” the Luftwaffe said. Gen Gerhatz’s IAF counterpart, Major General Amikam Norkin, accompanied the arrival of his aircraft and personnel in German airspace aboard a VIP Gulfstream G550.

“The German Air Force has had a great deal of its most important [operations] outside of NATO in recent years. The Israeli Air Force is considered one of the best air forces in the world. For German pilots it is of great value to get to know the procedures of the Israeli partners and thereby gain valuable knowledge. Blue Wings takes the partnership and especially the close friendship between the two countries to a new level,” the Luftwaffe said. German combat aircraft have previously participated in Exercise ‘Blue Flag’ held in Israel, with the last time being in 2019.

The Israeli Air Force (IAF) deployed combat aircraft to Germany for the first time in its history on...