The Israeli Ministry of Defense (MoD) and Elbit Systems announced on 21 June that a series of tests of an airborne high-power laser system had been successfully completed. 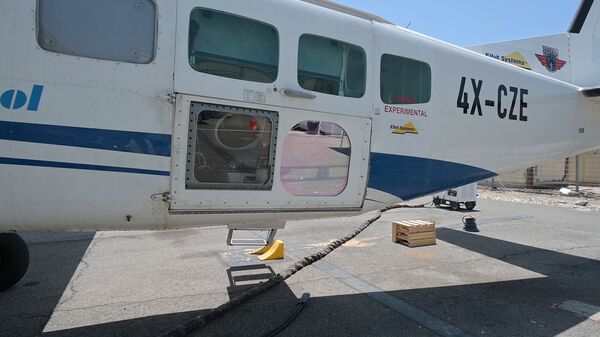 The airborne High-Power Laser Weapon System (HPL-WS) that was tested was carried by a Cessna 208 Carravan. (Israeli Ministry of Defense)

The MoD said the tests were carried out by its Directorate of Defense Research and Development (DDR&D), Elbit, and the Israeli Air Force and involved several unmanned aerial vehicle (UAV) targets being intercepted at various altitudes and ranges by the high-power laser weapon system.

“The ability to intercept and destroy airborne threats in the air is groundbreaking and offers a strategic change in the air defence capabilities of the State of Israel,” the statement added. “Israel is among the first countries in the world to achieve and demonstrate such capabilities employing an airborne, high-power laser system.”

During a conference call with journalists, Brigadier General Yaniv Rotem, the head of Research and Development in the DDR&D, and Oren Sabag, the general manager of Elbit Systems ISTAR, said a 100 kW solid-state laser with a range of 20 km was flown on board a Cessna aircraft at an altitude of 3,000 ft. The laser was able to track the UAVs and direct its beam on to them until they failed with a 100% success rate.

They said the tests were held recently as part of the first stage in developing a prototype of a 100 kW laser weapon, with more powerful versions being developed in the future.

The Israeli Ministry of Defense (MoD) and Elbit Systems announced on 21 June that a series of tests ...