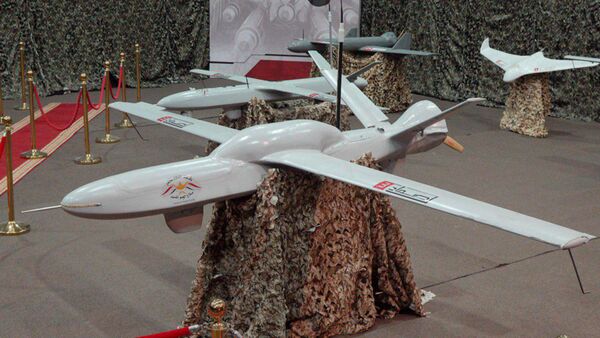 A Samad-3 long-range UAV displayed in Yemen in July 2019. Israel has now linked the type to the Iranian company KIPAS. (Ansar Allah)

Israel has named a type of unmanned aerial vehicle (UAV) that has been used by Iranian-backed groups in Yemen and Iraq to carry out attacks as the KAS-04 made by Iran's Kimia Part Sivan Company (KIPAS).

In a letter to the UN Security Council that was released on 17 November, Israeli Ambassador to the United States Gilad Erdan identified a KAS-04 as the UAV that intruded into Israeli airspace on 18 May.

The Israel Defense Forces (IDF) reported the attack at the time, saying it approached from Jordan before being shot down in northern Israel.

Erdan said the KAS-04 was launched from either Iraq or Syria and that the model has a range of 1,700 km, meaning it could reach Israel from launch locations deep inside Iran. He also noted that its manufacturer KIPAS has been sanctioned by the United States due to its links with the Qods Force, the external operations arm of Iran's Islamic Revolution Guards Corps (IRGC).

Erdan effectively identified the KAS-04 when he said that three examples were displayed as Shabab UAVs by Iraq's Popular Mobilisation Forces (PMF), which include Iranian-backed groups, during parades in Baghdad on 12 June and Diyala on 26 June.

Israel has named a type of unmanned aerial vehicle (UAV) that has been used by Iranian-backed groups...