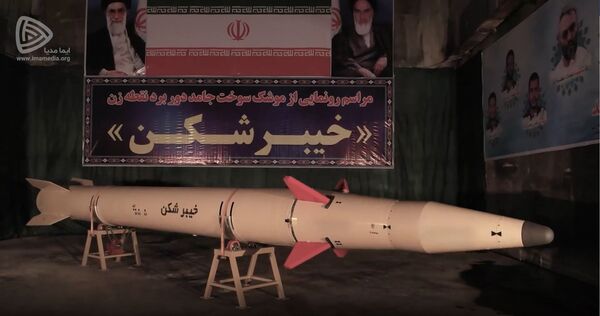 The IRGC unveiled the Kheibar Shekan ballistic missile in an underground missile base. (IMA Media)

The IRGC said the Kheibar Shekan has a range of 1,450 km: a significant increase on the Dezful that was unveiled in February 2019 and has a claimed range of 1,000 km, which was a big improvement on previous variants, but remains unconfirmed. No figure was given for the size of the new missile's payload, as was the case with the Dezful.

The missile's unveiling took place in an underground missile base during a visit by Chief of the General Staff of the Armed Forces Major General Mohammad Bagheri and IRGC Aerospace Force commander Brigadier General Amir Ali Hajizadeh.

Brig Gen Hajizadeh said the weight of the new missile has been reduced by a third and it is six times quicker to launch, without identifying the type he was comparing it against. He also said the missile is highly manoeuvrable in its terminal phase and that its warhead uses an explosive that is far more powerful than TNT.

The missile that was unveiled looked similar to the Dezful but with a re-entry vehicle that tapered more steeply into a warhead section that was partly cylindrical rather than entirely conical.

The video footage also showed eight transporter-erector launchers (TELs) in the underground facility that each appeared to be carrying two Kheibar Shekan missiles. While it was unclear if the TELs at the back were armed, this suggested the new missile is already being produced in numbers.