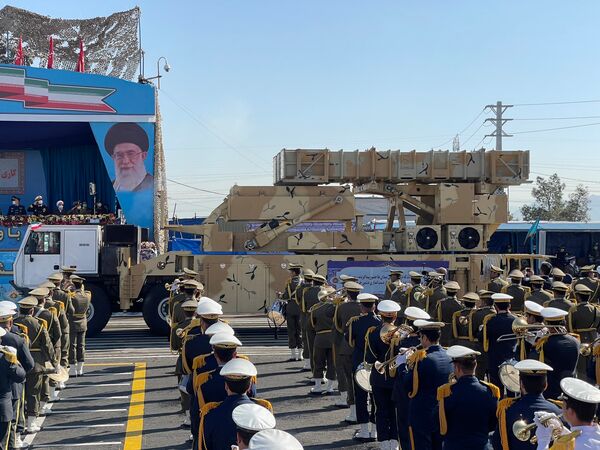 The new air-defence system is identified as the Tactical Hunter/Sayyad. (Tasnim News Agency)

The Iranian military displayed a previously unseen air-defence system and at least two new types of unmanned aerial vehicles (UAVs) during its Army Day parade in Tehran on 19 April.

The towed air-defence system had a launcher for three surface-to-air missiles and a phased-array radar mounted on a rotating platform. The launcher tilts backwards so the radar can fold forward to search and track targets when deployed.

The missile canisters were the same as the ones used with the 15 Khordad air-defence system and the radar appeared to be similar, which would make it a standalone version of a system that has separate radar and command post vehicles, as well as multiple launchers.

Tasnim News Agency identified the system as the Tactical Hunter/Sayyad, an apparent reference to the Sayyad family of surface-to-air missiles that are used with several Iranian air-defence systems, including the 15 Khordad.

The previously unseen UAVs displayed in the parade included one labelled as the Ababil-5 and two other seemingly identical examples of the same type.

The Iranian military displayed a previously unseen air-defence system and at least two new types of ...