Iran announced on 22 April that it had successfully launched a satellite into orbit earlier that day, breaking a run of failures that has plagued a space programme that US officials say is a way of testing ballistic missile technology. 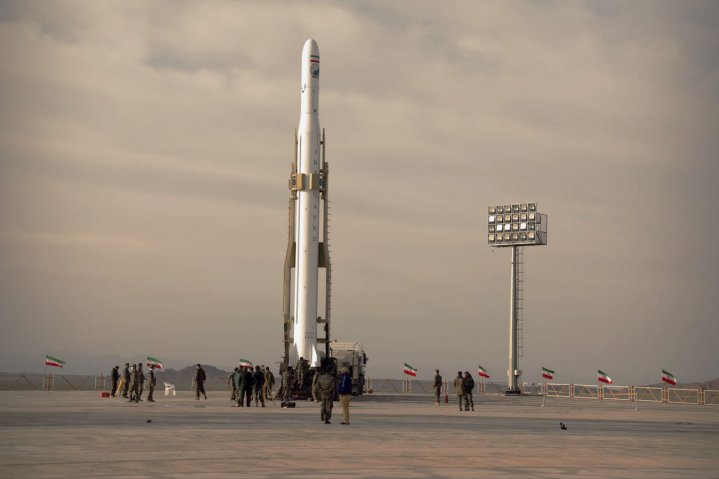 The new Ghased SLV is seen here being erected by a TEL on the launch pad at the Shahrud facility ahead of the apparently successful launch of the Noor-1 satellite. (Sepah News)

The Islamic Revolution Guards Corps (IRGC) announced that the Noor-1, the country’s first military satellite, was launched from a location in the Dasht-e Kavir desert and successfully put into a 425 km orbit.

Today, we look at the Earth from space, and this means expansion of the strategic intelligence and information of the IRGC’s powerful defence force,” IRGC commander Major General Hossein Salami said.

The United States did not immediately confirm the launch’s success, but General John Hyten, vice chairman of the Joint Chiefs of Staff, left little doubt that Iran had put a satellite into orbit.

“There’s a lot that has to happen before a satellite becomes operational or whether it even works or not and it takes a long time to characterise that because it goes around the world,” he said during a press conference later that day. “By this time tomorrow I imagine, if I was to stand up in front of you, I could explain exactly what was going on, whether it was successful or not. I just don’t have that information yet.”

Iran announced on 22 April that it had successfully launched a satellite into orbit earlier that day...

A rocket exploded on one of the launch pads at Iran’s Imam Khomeini Space Centre in Semnan province,...