Iran's Ministry of Defence and Armed Forces Logistics handed over the fourth locally built frigate to the Islamic Republic of Iran Navy (IRIN) at its Bandar Abbas base on 14 June. 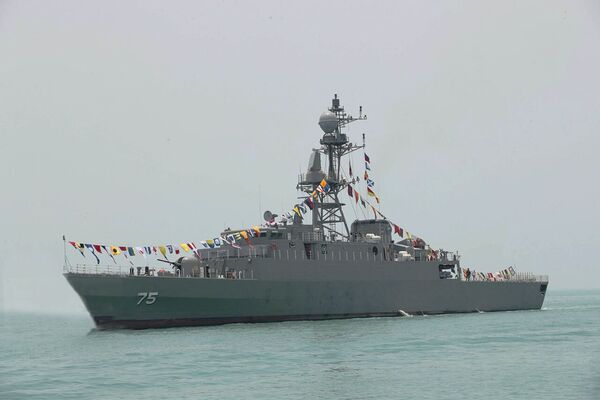 Dena is the fourth Mowj project frigate to be delivered to the Iranian navy. (Islamic Republic News Agency)

IRINS Dena (75) is the fourth Mowj version of the Alvand-class light frigate after Jamaran (76), Sahand (74), and Damavand (77), although the latter was lost in a January 2018 accident.

Photographs of the event showed Dena has a similar armament as the previous vessels: a 76 mm main gun, two Mehrab surface-to-air missiles in front of its bridge, four anti-ship missiles behind its funnel, and two three-tube torpedo launchers.

While the six-barrel Kamand close-in weapon system has been seen fitted to Sahand and Alborz , one of the three surviving Alvands vessels that have been in service with the Iranian navy since the 1970s, Dena is instead equipped with the same single-barrel 40 mm Bofors-type gun that was fitted to the other Mowjs and what appeared to be manually operated 23 mm guns.

All four Mowj ships have different radar setups, with Dena 's being closest to that of Damavand . It has the radome for what looks like a WM-28 search and track radar (identified by Iranian sources as the Samen) and a flat rotating antenna for what has been identified as the Asr phased array radar.

While Damavand had its Asr on a separate mount behind its mast, Dena 's is positioned at the front of the mast with the Samen mounted higher up.

A combination of maintenance failures and human error led to the fatal assault amphibious vehicle (A...

Israeli Military Intelligence has not identified any Iranian progress on developing a nuclear weapon...
Request Consultation