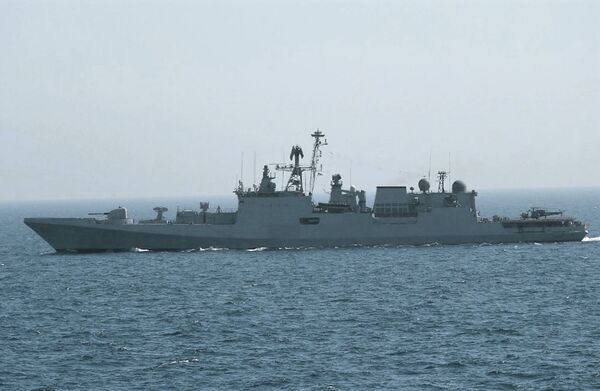 These systems include a new electronic warfare (EW) suite, radars and sonars, and are visible in recent images of the ship taken throughout its ongoing deployment in the Mediterranean and Europe.

Among equipment seen on the frigate include a Bharat Electronics (BEL)-built EW system that has been installed in place of the older Russian-origin ASOR 11356 EW system. The BEL-built system appears to be the Varuna electronic support measures (ESM) suite developed by India's Defence Electronics Research Laboratory (DLRL).

The system has a distinctive rectangular broadband receiver assembly atop the main mast along with two narrow band receivers installed on bespoke lattice masts on either side of the bridgehouse. However, it is not clear if older jammer elements were retained as part of the ship's EW suite.

According to DLRL literature, the Varuna ESM system is capable of identifying both low probability of intercept radars and conventional radars with a 360° azimuth coverage. The system can monitor as many as 500 radar emitters in a dense electronic environment.

Other noticeable changes on the Tabar include a removal of the Garpun Bal surface search and targeting radar for the Klub (and possibly Brahmos) surface-to-surface missile system, and its replacement by what appears to be a Terma Scanter radar set.