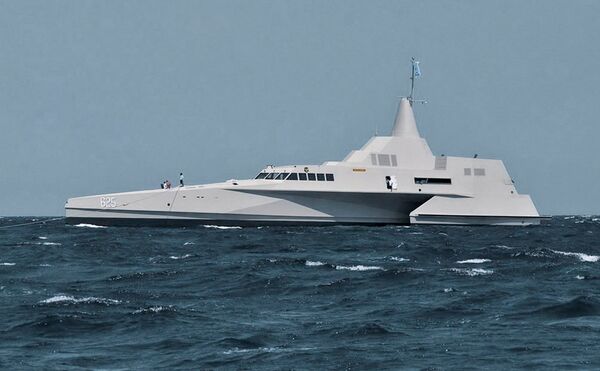 KRI Klewang is seen here before it was gutted by the 2012 fire. Indonesian shipyard PT Lundin launched a similar vessel, KRI Golok , on 21 August 2021 to replace Klewang . (PT Lundin)

The vessel, which will be in service as KRI Golok with pennant number 688 once commissioned, replaces a similar vessel, KRI Klewang (625), that was gutted in a 2012 fire. Golok took to the water at a naming and launching ceremony in Banyuwangi, East Java, on 21 August.

Klewang, which was declared unsalvageable after the fire, was built by PT Lundin after a 24-month research collaboration with New Zealand naval architects, LOMOcean Design. Its hull and superstructure were constructed with infused vinyl ester carbon fibre, with its main gun concealed in a stealthy cupola to minimise the overall deflection of radar signals from the vessel.

Images and information released by the TNI-AL suggest that Golok has inherited the design features of Klewang, including the wave-piercing trimaran hull form factor, and waterjet propulsion system.

“The vessel is made from composite materials, which is lighter and stronger, can better withstand corrosion, and is less likely to be detected by the enemy,” the TNI-AL chief, Admiral Yudo Margono said in a statement made at the vessel's launching ceremony. “It will also be equipped with missiles and the vessel can be deployed for ‘hit-and-run' operations,” he added.

At the time of publication, PT Lundin and the TNI-AL had not responded to requests for more information on Golok's specifications, and the weapons and sensors that would be fitted onboard the vessel.