Named Alugoro (with pennant number 405), the 61.2 m-long boat was handed over by state-owned shipbuilder PT PAL Indonesia in a ceremony held on 17 March at the company’s facilities in Surabaya that was presided over by Defense Minister Prabowo Subianto. 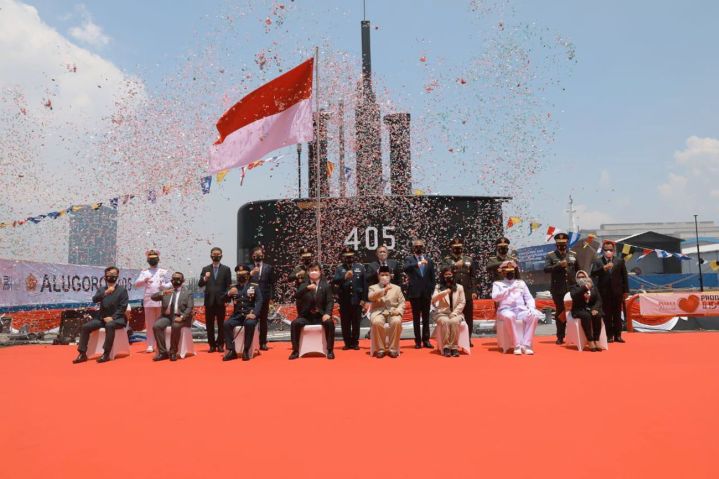 The TNI-AL took delivery of its third Nagapasa-class SSK in a ceremony held on 17 March at the facilities of state-owned shipbuilder PT PAL in Surabaya. Alugoro is the first-ever SSK to be assembled in Indonesia. (Indonesian MoD)

Alugoro, which was launched in April 2019, is the first-ever SSK to be assembled in Indonesia. The construction was done in collaboration with engineers from South Korean shipbuilder Daewoo Shipbuilding and Marine Engineering (DSME) under a technology transfer arrangement.

First-of-class KRI Nagapasa (403), which was commissioned in August 2017, and second-of-class KRI Ardadedali (404), which entered service in April 2018, were both built at DSME’s Okpo shipyard on South Korea’s Geoje Island.

The submarines are part of a KRW1.3 trillion (USD1.15 billion) contract signed between DSME and the Indonesian Ministry of Defense in December 2011.

In 2019 Jakarta signed a contract with DSME for three follow-on boats. However, as Janes reported, Indonesian defence planners began rethinking that decision in April 2020 and are still considering several options with regards to the country’s submarine programme, including terminating the contract with DSME.