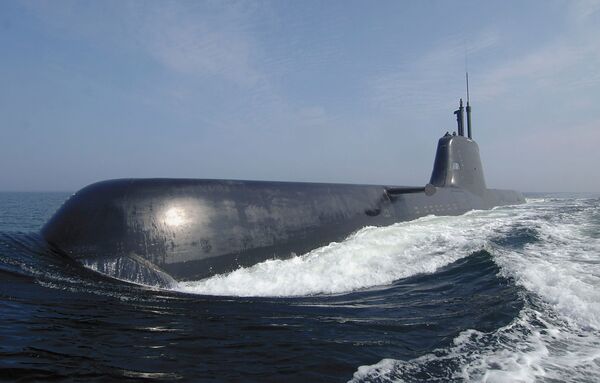 A Portuguese Navy Tridente (Type 214)-class submarine. Indonesia has held another round of talks with TKMS for the latest variant of this submarine type. (TKMS)

Officials from the Indonesian Navy and the Ministry of Defence have held another meeting with German shipbuilder ThyssenKrupp Marine Systems (TKMS).

This time, it was to discuss the HDW Class 209/1400mod submarine for Jakarta's underwater warfare requirements. The meeting was held virtually on 12 January, a source close to the discussions has informed Janes.

The matters that were discussed include the HDW Class 209/1400mod's mission profiles and if it can undertake missions required of the Indonesian Navy including conventional submarine warfare, and other operations such as intelligence gathering and special forces insertion.

The HDW Class 209/1400mod is the most recent version of TKMS' 209 family of diesel-electrically powered submarines. The vessel has an overall length of 62 m, a pressure hull diameter of 6.2 m, and it displaces about 1,450 tonnes when surfaced. The vessel is equipped with eight weapon tubes and can accommodate a crew of 30.

Also rediscussed during the meeting was TKMS' Class 214 family, which can be equipped with air-independent propulsion (AIP) systems.

This is the second known formal meeting held between Indonesian defence officials and TKMS. As reported by Janes in March 2021, a TKMS delegation was in Jakarta that month to brief Indonesian defence planners on the company's Class 214 offerings.

The Indonesian Navy (TNI-AL) operates one German-made Cakra (Type 2019/1300)-class submarine that has been in service since the 1980s, and three South Korean-made Nagapasa (DSME 2019/1400)-class SSKs that were commissioned between 2017 and 2021. The service lost one Cakra-class submarine in a mishap in April 2021 and the vessel and its crew were never recovered.

Officials from the Indonesian Navy and the Ministry of Defence have held another meeting with German...