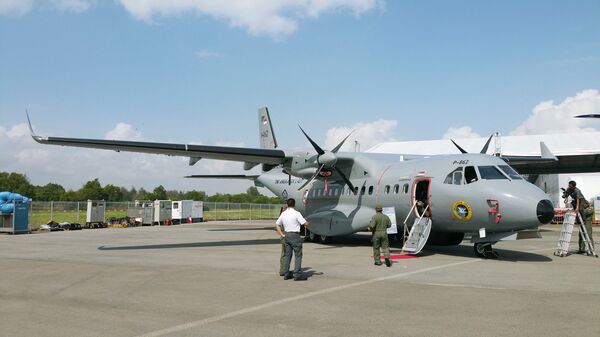 An Indonesian maritime patrol aircraft variant of the CN235 at the Singapore Airshow in 2016. (Janes/Ridzwan Rahmat)

Indonesia is seeking greater autonomy from Airbus in the manufacturing process for the CN235 twin-turboprop aircraft.

Meeting documents provided to Janes indicate that Indonesian Ministry of Defence (MoD) officials have included this objective as an offset condition should Jakarta decide to procure A400M multirole aircraft for the Indonesian Air Force.

The CN235 is a medium-range utility aircraft that was jointly developed by Construcciones Aeron´auticas SA (now part of Airbus) and Indonesian manufacturer PT Dirgantara Indonesia – PTDI (earlier known as IPTN) in the 1980s.

Several variants of the aircraft have since been developed, with PTDI securing contracts for maritime patrol and transport versions of the airframe with customers like the Indonesian armed forces, the Nepal Army Air Wing, and the Senegalese Air Force since 1993.

As reported by Janes in October 2021, the Indonesian MoD has restarted talks to potentially procure a fleet of Airbus A400Ms to enhance military airlift capabilities of its air force. Indonesian defence planners are also in consultation with Airbus to understand if the aircraft type can also fulfil its air force's in-flight refuelling requirements.

An attendance list of the recent meeting that took place between Indonesian officials and Airbus on 1 October includes five representatives from the MoD's Directorate General for Defence Potential, a senior executive of PTDI, and representatives from state-owned aerospace service provider, GMF AeroAsia.

Documents from this meeting further indicate that PTDI is pushing to manufacture more segments of the CN235 at its facilities in Bandung, Indonesia.

Indonesia is seeking greater autonomy from Airbus in the manufacturing process for the CN235 twin-tu...