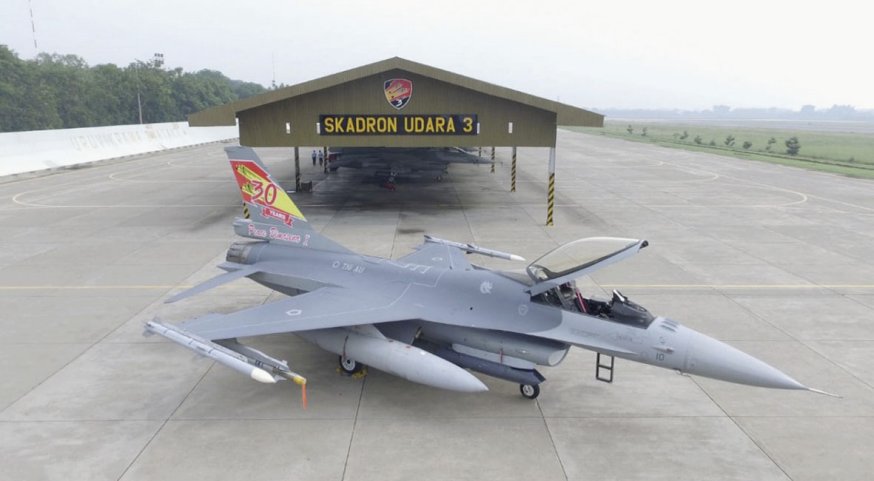 The new livery, which has been applied to the aircraft with serial number TS-1610, was rolled out on 9 April as part of the TNI-AU’s 74th anniversary celebrations. It previously sported a Tosca green livery scheme.

The airframe was showcased in a ‘combat air patrol’ configuration and this included AIM-9X dan AIM-120C AMRAAM air-to-air missiles. However, a military source confirmed with Jane’s on 20 April that the missiles are captive air training missile (CATM) versions of these weapons.

The airframe was also seen with the Sniper electro-optical/infrared (EO/IR) advanced targeting pod (ATP) manufactured by Lockheed Martin Missiles and Fire Control (LMMFC). This equipment is yet to be operationalised pending the delivery of the airframe’s Joint Direct Attack Munition (JDAM) guidance tail kit, the same military source confirmed.

TS-1610 is the first TNI-AU F-16 aircraft to undergo the Falcon STAR and EMLU programme. As part of the upgrades, the airframe was structurally reinforced, and received improved avionics and weapon systems, including interrogator antennae for an identification, friend or foe (IFF) system.

The airframe undertook its first post-upgrade flight in February 2020 from the Iswahyudi Air Force Base in Madiun, East Java. It is now in service with the TNI-AU’s Skuadron Udara (Aviation Squadron) 3.

Indonesia has plans to upgrade a further nine F-16A/B aircraft under the Falcon STAR programme.