The government of India plans to sell additional stakes in state-owned Hindustan Aeronautics Limited (HAL) to raise funds worth about INR50 billion (USD675 million). HAL said in stock exchange filings that a 10% stake is to be sold through the sale of 33.4 million shares listed on 27 August.

The company added that if this share sale is oversubscribed the government will sell an additional 5% stake – featuring 16.7 million shares – on 28 August. Both share-sale offers are open to personal and institutional investors. 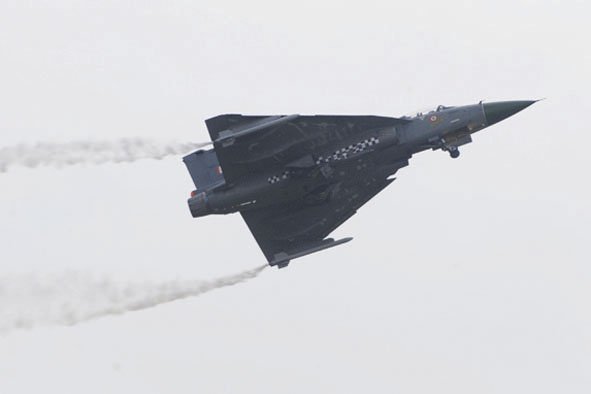 The Indian government is seeking to raise about USD675 million through the sale of shares in Hindustan Aeronautics Limited, manufacturer of the Tejas Light Combat Aircraft (pictured). (HAL)

HAL said the base price per share through the sale was INR1,001, meaning that the divestiture could raise up to INR50.15 billion. On 27 August HAL shares were trading at INR1,016.

The share sale means that the government’s total divested interest in HAL could be 25%. A 10% stake was also sold off in 2018 through an initial public offering (IPO).

According to the filings, HAL’s total revenue in 2019/20 was INR214.4 billion (USD2.8 billion) and its net profit was INR28.3 billion. These figures represent year-on-year increases of 7.1% and 20.7% respectively. The value of HAL’s assets at the end of the fiscal year was INR532 billion.

HAL said its strong results for the year indicated that the effects of Covid-19 had been limited. “The impact due to Covid-19 [has been] minimal as a major portion of the company’s revenue is generated from defence services,” it said.