In a statement issued the same day, the Indian government's Press Information Bureau (PIB) said that the low-weight, fire-and-forget weapon was launched in direct-attack mode from a manportable launcher integrated with a thermal sight, adding that it successfully hit a mock tank target. 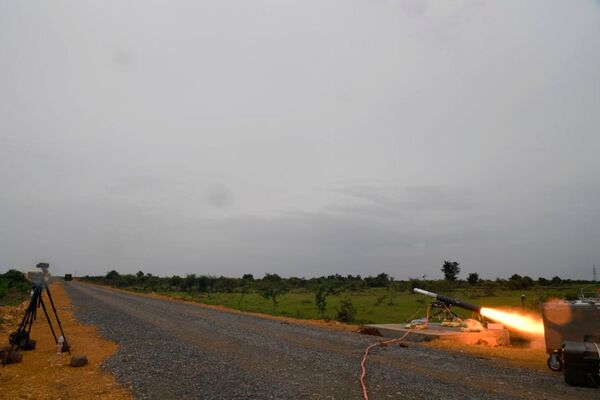 On 21 July India's DRDO test-fired a new manportable ATGM being developed for the Indian Army. (DRDO via PIB)

This most recent test validated the weapon's minimum range, noted the PIB, adding that the missile had already been flight-tested for maximum range.

The MPATGM features a miniaturised infrared imaging seeker along with advanced avionics, noted the PIB, adding that the test has brought the development of this third-generation ATGM “close to completion”.

Janes understands that the 14.5 kg weapon is armed with an anti-armour tandem-HEAT warhead and features folded wings located behind the main warhead and four folding control fins at the rear.

An onboard powerpack is situated mid-body between the warhead and rocket motor. The weapon system comprises a launching unit with a thermal sight and a containerised missile.

On 21 July the DRDO also conducted another test-firing of the Akash-NG (New Generation) surface-to-air missile (SAM), which is being developed locally for the Indian Air Force.

The missile was launched from the Integrated Test Range (ITR) off the coast of Odisha in eastern India, noted the PIB, adding that trial took place “with all weapon system elements such as the multifunction radar; the command, control, and communication systems; and the launcher in deployment configuration”.