Indian Army sets up Integrated Battle Groups along the borders 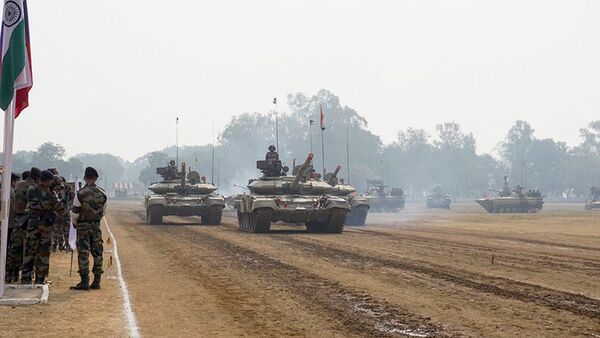 Indian T-90 MBTs on parade as part of a joint exercise with Russian forces in April 2021. (Russian MoD)

The Indian Army has initiated the formation of new combat units known as Integrated Battle Groups (IBGs) along the borders with China and Pakistan.

The Western Command of the Indian Army, which remains in a medium‐readiness state for a conventional war against Pakistan, has conducted an IBG exercise. This is one of the IBGs formed by the Indian Army along the borders.

On October 12 the Vajra Corps (11 Corps) of the Western Command along with the Garutmaan Attack Helicopter Squadron conducted an integrated exercise to demonstrate combat potential.

Janes learnt that the infantry operated with weapon systems such as the Russian T‐90 main battle tanks (MBTs), BMP‐2 infantry combat vehicle (ICV), among others, in the exercise.

A senior defence official from the Indian Army's Western Command told Janes that the exercise was conducted as a part of the IBG concept. However, the official did not share the location of the exercise for security reasons.

“The exercise was held to check the readiness of Vajra Corps for [the] Western Command's biggest IBG exercise,” the official added.

In October 2022 the Indian Army is planning to conduct an IBG exercise on the western front, the army's press information officer (PRO) said.

According to a press release by PRO Chandigarh, the offensive formations of the Indian Army are preparing to participate in a military exercise in western India in October 2022.

The PRO added that the exercise is planned to validate newly converted mechanised formations known as reorganised plains infantry divisions and to test the efficacy of the latest induction and upgrades in weapons and equipment.

The Indian Army has initiated the formation of new combat units known as Integrated Battle Groups (I...