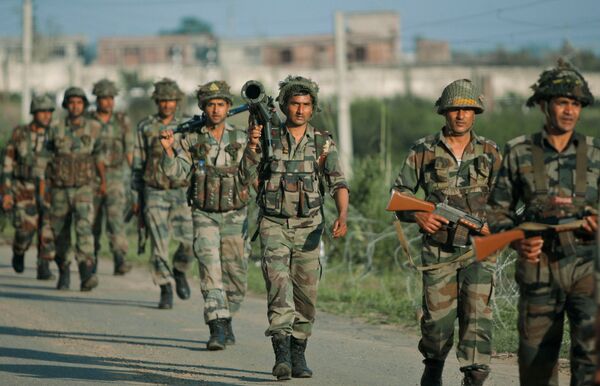 Indian Army officials said the test-bedding for IBGs will continue for some time before the programme is implemented in phases. (AP)

A senior Indian Army official told Janes on 20 September that the service is test-bedding the IBG concept, and will implement it in a phased manner.

“The concept of IBG has already been test-bedded with the army's 9 Corps on the western border with Pakistan and the 17 Mountain Strike Corps on India's northern border with China. The test-bedding will go on for some time, and then the IBGs will be rolled out in a phased manner,” the official said.

The IBG concept seeks to convert existing forces into more flexible and agile units, the official said. “The strength of one unit of IBG will be around 8,000−10,000 [personnel]. The IBGs will integrate all the units such as infantry, artillery, armoured, and logistics. So, the forces can be positioned quickly on the borders in a war situation,” the official added.

The official confirmed that there would be technology upgrades as well. “IBGs will be terrain specific. The IBGs on the western border will be different from the IBGs on the northern border,” the official said.

“The western border of India is mostly a desert area. So, there will be a predominance of tracked vehicles. On the hilly northern borders, [the service will mostly operate] light artillery and helicopters… So as per the terrain requirements, the [appropriate] technology will be inducted into the IBGs,” the official said.