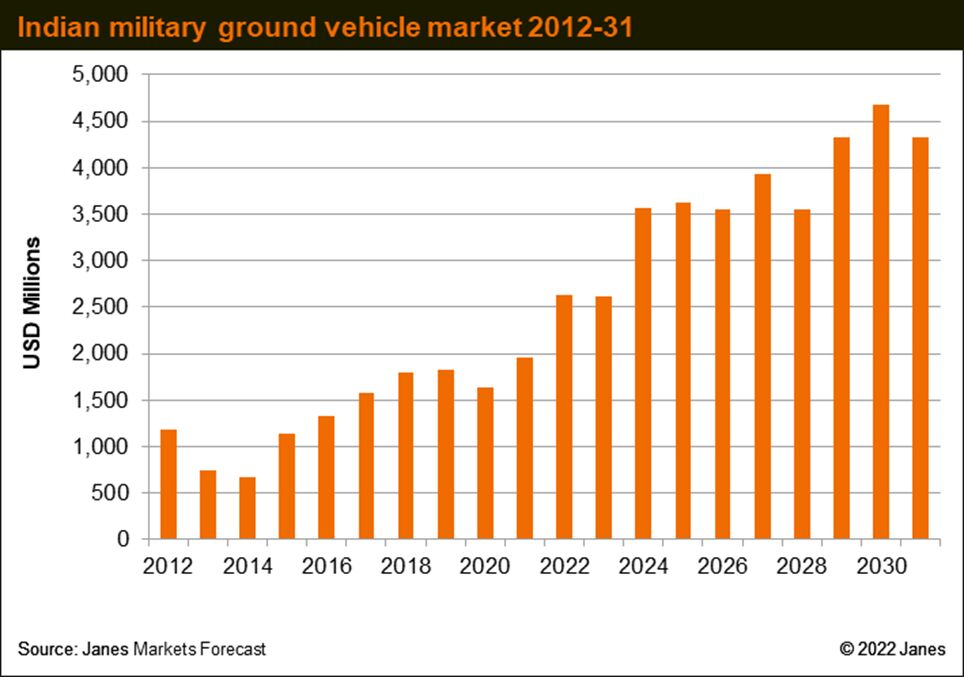 Between 2022 and 2031, Janes forecasts that India's military ground vehicle market will be worth about USD37 billion. This includes about USD1 billion allocated to the new wheeled AFV programme. (Janes Markets Forecast)

In an ‘acceptance of necessity' (AoN) document issued by the army on 6 July, the service confirmed that the AFVs would be procured from local industry.

The AoN also stated that field trials of wheeled AFVs would start 36 months following the issue of the request for proposal (RFP). It said trials would be undertaken on a ‘no cost, no commitment' basis.

The document did not clarify when the RFP would be issued but said potential suppliers can express interest in obtaining the RFP from the army and government bodies including the Directorate General of Mechanised Infantry and the Department of Defence Production.

The AoN document was issued one month after the Ministry of Defence (MoD) announced that the procurement of “AFVs fitted with ATGMs” had been approved by its Defence Acquisition Council (DAC).

The MoD has not recently disclosed information about the value of the procurement or the number of AFVs to be acquired.

However, in a request for information (RFI) issued by the Indian Army in November 2019, it said it planned to procure 198 AFVs in an 8×8 configuration. According to Janes Markets Forecast, the wheeled AFV programme will be worth about USD1 billion between 2022 and 2031.

The Indian Army has detailed requirements supporting its acquisition of a wheeled armoured fighting ...