The Indian government has disclosed more information about its plan to restructure its network of 41 defence factories presently operating under the Ordnance Factory Board (OFB).

In details revealed in the Indian parliament on 26 July, Ajay Bhatt, minister of state for defence, confirmed that the OFB would be reorganised into seven state-owned defence public sector undertakings (DPSUs) under the administrative control of the Ministry of Defence (MoD's) Department of Defence Production (DDP). 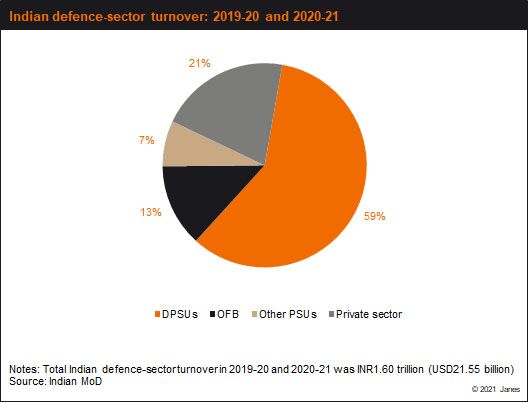 He said the restructure – described by the MoD as ‘corporatisation' – is intended to “enhance [the OFB's] functional autonomy, efficiency and unleash new growth potential and innovation”.

Details provided by Bhatt show that the largest of the new DPSUs will be the ‘Ammunitions and Explosives' entity, which will comprise 12 existing OFB factories. The Weapons and Equipment DPSU will comprise eight factories; Vehicles will have five; Ancillary (eight); Troop Comfort Items (four); Opto-electronics (three); and Parachute (one).

The OFB's administrative base is in Kolkata but its facilities are spread across the country, although nearly half are located within two states: Uttar Pradesh in the north and Maharashtra in the western peninsular region of India.

Bhatt confirmed that the decision to corporatise the factories was taken by India's Cabinet in July. The move, he said, will “convert” the OFB into wholly owned “government corporate entities”. As such, the corporate entities will be encouraged to pursue profits and to bid for competitive contracts.

The Indian government has disclosed more information about its plan to restructure its network of 41...