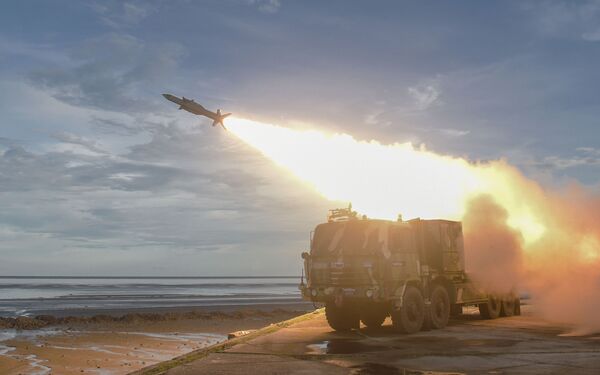 An Akash Prime missile seen here in a test firing at the DRDO's integrated test range in Odisha on 27 September 2021. (Ministry of Defence, India.)

India has carried out the maiden test firing of its new Akash Prime surface-to-air missile (SAM).

The weapon was fired from the Defence Research and Development Organisation's (DRDO's) integrated test range at Chandipur, Odisha, on 27 September 2021.

The missile intercepted and successfully destroyed an unmanned aerial target that mimicked enemy aircraft, the Ministry of Defence (MoD) announced on the same day.

Akash Prime is an improved variant of the Akash medium‐range, solid‐fuelled SAM that was designed for the Indian Air Force (IAF) and the Indian Army.

The newer weapon is equipped with an indigenously developed active radio frequency seeker for improved accuracy, the MoD said.

Other improvements that have been incorporated on to the weapon include more reliable performance under low temperature environments at higher altitudes, the ministry added.

As reported by Janes in September 2019, the Indian federal government has approved the procurement of six additional squadrons of the Akash system for the IAF for INR55 billion (USD767.7 million).

The procurement is estimated to yield between 550–600 Akash missile units, a number of which will likely be of the new Akash Prime variant.

India has carried out the maiden test firing of its new Akash Prime surface-to-air missile (SAM).