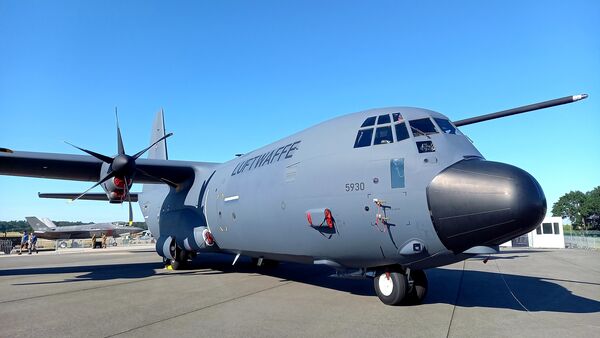 With the first of six new Hercules aircraft for Germany displayed at ILA 2022 (pictured), the second is to arrive in the coming days. (Janes/Gareth Jennings)

Lockheed Martin is progressing Germany's KC/C-130J Hercules programme, with the arrival of the second aircraft into Évreux-Fauville Air Base in northern France, in the coming days.

Speaking at the ILA Berlin Air Show on 22 June, Tony Frese, Lockheed Martin's vice-president, Air Mobility and Maritime Missions, said that aircraft 55+02 will arrive at the home of the joint Franco-German C-130 unit in Normandy in the coming days, with the third to follow in 2023, and the remainder by the end of 2024.

With 55+01 having been delivered in February, 55+02 is the second of three ‘stretched' C-130J-30 airlifters that Germany is contributing along with three ‘short‘ KC-130J tanker-transports to the new joint transport squadron. The French Air and Space Force is contributing two C-130J-30s and two KC-130Js.

This C-130 air transport squadron will have unrestricted exchange of aircraft, aircrews, and maintainers, as well as technical and logistical support based on a common pool of spare parts and a common service support contract. “Ten aircraft, two nations, one association – there has never been anything like this in Europe,” the Bundeswehr has previously said.

The joint air transport squadron is scheduled to achieve full operating capability in 2024–25.

Lockheed Martin is progressing Germany's KC/C-130J Hercules programme, with the arrival of the secon...