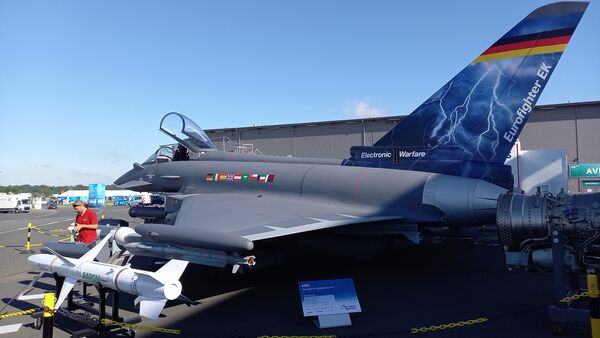 A full-scale mock-up of the Eurofighter ECR, dubbed Eurofighter EK, was showcased for the first time at ILA 2022. (Janes/Gareth Jennings)

Germany is expected to shortly authorise development of the Eurofighter Electronic Combat Role (ECR) aircraft, following the type's selection for the Luftwaffe in March.

The ILA Berlin Air Show running from 22 to 26 June is likely to provide the German government with the occasion to formally launch the Eurofighter ECR project, which was first touted back in 2019, having decided to acquire the aircraft alongside the Lockheed Martin F-35A Lightning II Joint Strike Fighter to partially satisfy its future combat aviation requirements.

Janes first reported that Eurofighter stakeholder Airbus was eyeing a dedicated electronic attack (EA) version of the aircraft at the IQPC International Fighter conference in Berlin in November 2019. At that time, the Eurofighter ECR was billed as being the escort jammer component of a system-of-systems designed to provide a comprehensive EA capability, with the other elements of the system being a stand-off jammer aircraft and stand-in jammer effectors.

As noted at the time, the Eurofighter ECR was to be developed as either a twin- or single-seat platform (although the likelihood is that operators would opt for the twin-seat owing to the high workload of the mission) fitted with an active electronically scanned array (AESA) radar. It would carry up to three escort jammer pods on the underwing and underfuselage stations depending on the mission requirement. In April 2020 Hensoldt revealed a new Kalaetron Attack airborne jammer that it planned to develop for the platform.