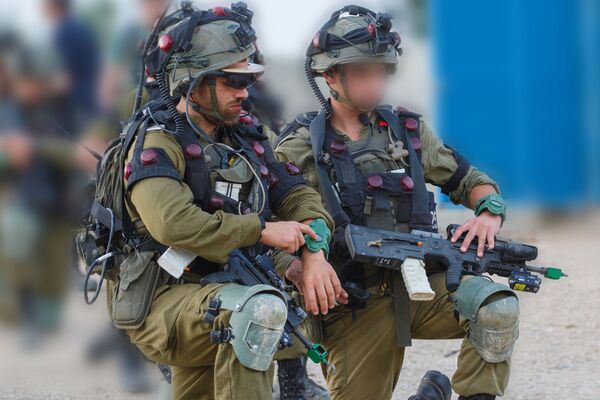 Israeli soldiers wearing ‘tactile sleeve' devices as part of the Edge of Tomorrow programme that is focused on improving the performance of infantry at the platoon level. (Elbit Systems)

Israel's Ministry of Defense's (MoD's) Directorate of Defense Research and Development (DDR&D) and Elbit Systems announced on 10 May a new programme to improve infantry lethality and survivability called Edge of Tomorrow.

Led by Elbit's C4I and Cyber Systems Division and the DDR&D, the programme is designed to boost “stamina, cognitive load, enemy exposure, performance analysis and simulation, command-and-control, and more among combat soldiers in the IDF's [Israel Defense Forces'] dismounted corps”, the statement said.

The programme will be based on Elbit's Torch-X-based battle management applications for teams and platoons. Technologies will be plugged into the open network, such as augmented-reality goggles, computerised assault rifles, digital head-mounted displays, tactile sleeves for navigation and command transmittance, and other technologies.

An Israeli defence source told Janes that Edge of Tomorrow is intended for the platoon level as previous programmes focused on individual soldiers. “The programme is trying to achieve two things. The first is to create a methodology that measures success. This is something we worked on together for a long time. It's about measuring the effectiveness of technologies that can serve the combat unit,” the source said. “The second pillar is based on creating an open digital infrastructure, placing it on the fighting unit, and adding technologies to it, technologies made both by Elbit and tens of other start-ups.”