The United Arba Emirates’ (UAE’s) Nimr has launched a second-generation of Ajban 4×4 and Hafeet 6×6 protected-mobility vehicles at the International Defence Exhibition & Conference (IDEX) 2021 trade show in Abu Dhabi on 21–25 February. 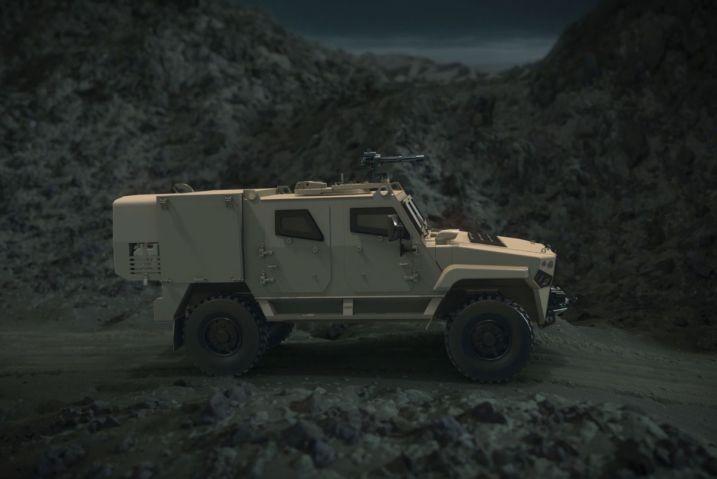 A computer-generated image of the Ajban Mk 2. (Edge)

“We realised exactly a year ago that our product portfolio was due an evolution and we realised that we could not simply upgrade the existing designs. We had to start from scratch,” Al Zaabi said.

Nimr has opted for a monocoque hull for the second-generation rather than the chassis-hull design used for the original Ajban and Hafeet. Al Zaabi said the company’s key objectives for the new design were improved survivability, an expanded payload, and a high degree of maintainability.

“This has saved around 500 kg in weight, which has enabled us to provide a payload of 2.5 tonnes over the 1.5 tonnes of the earlier generation, and increase both blast and ballistic protection that is certified in accordance with STANAG 4569,” he said.

Unlike the previous generation, which had flat-bottomed hulls, the new monocoque design has a V-shape hull built from armoured steel. This increases blast protection without adding considerably to the thickness of the armour as the streamlining reduces the force imparted by a mine blast by dissipating the shock waves up and around the vehicle, minimising the risk of it being turned over.

The United Arba Emirates’ (UAE’s) Nimr has launched a second-generation of Ajban 4×4 and Hafeet 6×6 ...