The Halcon Systems guided weapons division of the United Arab Emirates’ (UAE’s) Edge defence group has unveiled a surface-to-air missile (SAM) that will be used with Rheinmetall’s Oerlikon Skynex system to provide it with a counter-rocket, artillery, and mortar (C-RAM) capability. 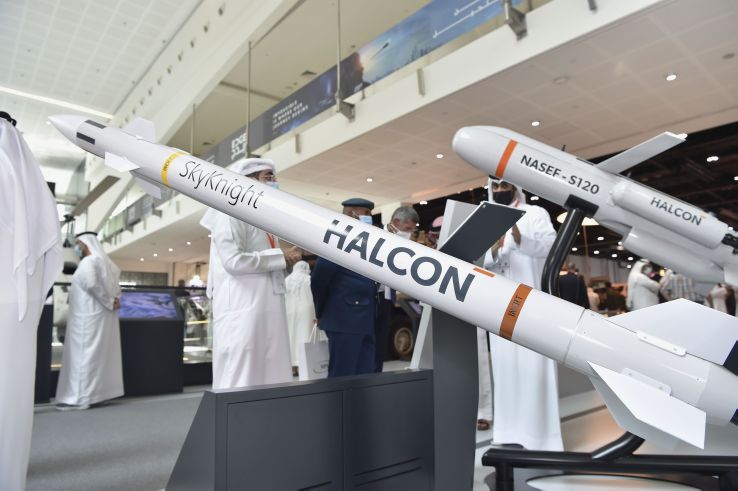 Edge announced during the International Defence Exhibition & Conference (IDEX) 2021 show in Abu Dhabi from 21–25 February that Halcon was already developing its SkyKnight short-range SAM when the decision was made to team with Rheinmetall, which it said was actively looking for a missile for its Oerlikon Skynex air-defence system.

The group said SkyKnight is capable of engaging fixed-wing aircraft, helicopters, unmanned aerial vehicles (UAVs), and RAM munitions at a range of up to 10 km. It said the launchers will have a capacity of 60 missiles and can be deployed on land vehicles or ships. An Edge video added that 16 missiles can be launched in 3.5 seconds to engage different targets.

“SkyKnight is the UAE’s first but [not the] last air-defence missile developed by Halcon,” said Edge CEO Faisal al-Bannai. “We are pleased to team up with Rheinmetall, a leading player in the defence industry, for us to jointly offer the world’s most advanced and comprehensive C-RAM solution.”

Oerlikon Skynex is Rheinmetall’s latest air-defence system that links the company’s X-TAR3D radar with a command-and-control (C2) module that can assign targets to up to four 30 mm revolver guns that engage them using their own tracking radars and cameras.

South Africa’s Paramount Group announced the launching of its new swarming UAV technology based on t...

US to deploy another Patriot to Saudi Arabia