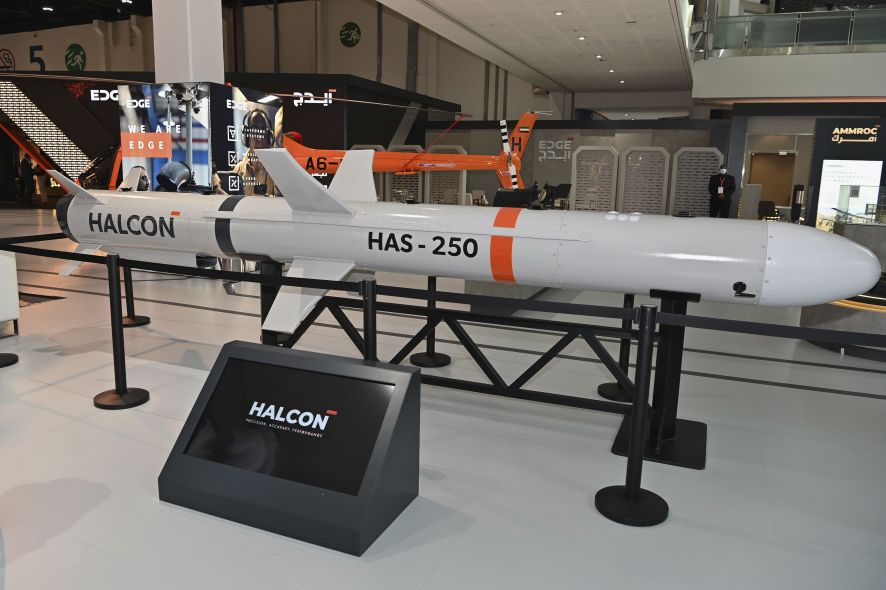 “The HAS-250 is a UAE-designed and developed surface-to-surface missile capable of travelling at speeds of up to 0.8 Mach, with a range of over 250 km,” Edge said in a press release. “During its terminal phase, it can fly towards its target at a sea-skimming altitude of below 5 m.”

It said it uses a combination of GNSS and INS mid-course guidance systems and has an active/passive radar seeker for the terminal phase. A video released by Edge said the missile uses the HS-350 turbojet engine and has an anti-jamming system. It also showed it has a solid-propellant booster that drops off after launch.

A launcher on an Iveco Astra truck with two missile canisters was displayed at the show.

“The HAS-250 is a significant advancement in our quest to equip naval forces with the highest performing cruise missile system,” Halcon CEO Saeed Al-Mansoori was quoted as saying.

He suggested the HAS-250 is being developed for the UAE Naval Forces, saying “this weapon will assist in the active defence of the UAE’s waterways”.

The United Arab Emirate’s (UAE’s) Edge group unveiled the HAS-250 anti-ship missile as a ground-laun...

The United Arba Emirates’ (UAE’s) Nimr has launched a second-generation of Ajban 4×4 and Hafeet 6×6 ...