Albatros-S (Swarm) is the latest addition to Aselsan's growing USV portfolio and is a privately funded development aimed at meeting a domestic research and development (R&D) programme, aimed at investigating unmanned swarming capabilities.

The effort was initiated by the Division for Innovative Systems of the Presidency of Defence Industries (Savunma Sanayii Başkanlığı, or SSB), Turkey's primary defence procurement agency. 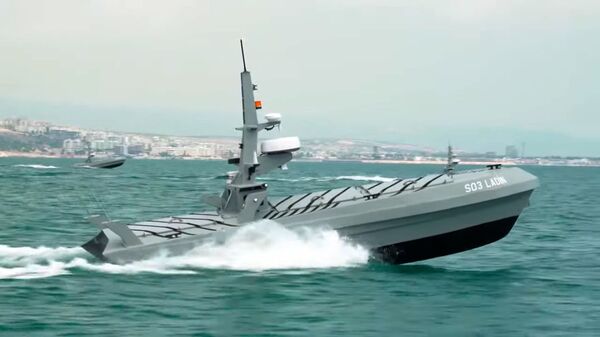 Aselsan claims the Albatros-S features a high level of autonomy, and is designed to operate without any user intervention. The company also asserted that the USV is capable of navigating and collaborating with other sea vehicles independent of centralised command-and-control (C2).

For example, individual sea vehicles can detect stationary or moving obstacles and share sensor data with other nodes within the swarm, enabling autonomous course correction and collision avoidance.

The Albatros-S adopts a wave-piercing monohull that has been optimised for reduced radar and thermal signature. It measures 7.2 m long and 2 m wide, with a displacement of approximately 1,955 kg, inclusive of a 250 kg payload.

The propulsion system comprises a single diesel engine that enables the USV to attain speeds of up to 40 kt, and an operating endurance of at least 10 hours.

The USV is equipped with both line-of-sight (LOS) and satellite communications (satcom) for short-range and over-the-horizon C2 within the swarm, as well as with the shore-based command centre.

Janes understands that the Albatros-S is also unarmed in its current state of development, and there are no plans by Aselsan to incorporate armaments.

Aselsan showcased its new Albatros-S unmanned surface vehicle (USV) at the IDEF 2021 exhibition in I...