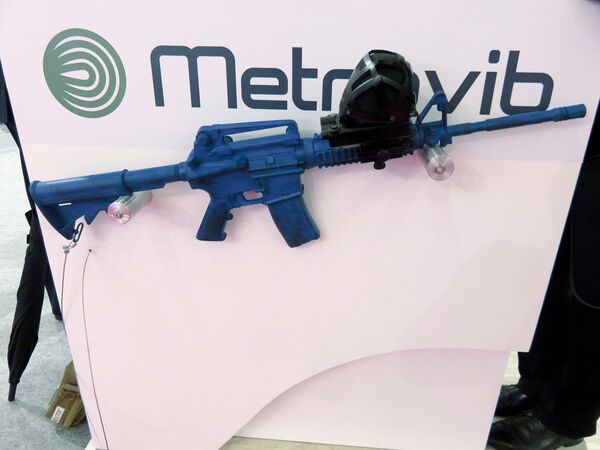 Speaking at the International Armoured Vehicles 2022 conference in London, a company representative told Janes that the next evolution of the PEARL technology would be a smaller and more compact array, able to be directly integrated to the back of the soldier's helmet, or other wearable pieces of equipment.

Although smaller and lighter, this solution would likely come with the trade-off of less precision in the detection of the elevation of the incoming shot.

PEARL is essentially a scaled-down version of Metravib Defence's flagship system, the PILAR V, and was revealed in 2012. PEARL consists of an array of four microphones housed in a single unit. The unit itself weighs around 400 grams and is designed to be mounted to the host weapon via a MIL-STD-1913 ‘Picatinny' rail interface.

The base interface is composed of directional LED arrows that show the azimuth and elevation of the threat. Fire localisation accuracy (RMS) is stated as: ± 7.5° azimuth; ± 7.5° elevation. When a shot is detected, the red arrows will indicate the directions in which the user needs to turn and face to return fire. The central LED display will glow green once the weapon is pointed in the correct azimuth and elevation.

The system automatically filters out outgoing fire and can retain the target location, even after the user relocates from the initial shots. An optional screen can be fitted to the system to display additional information such as the estimated range of the incoming fire. The system is powered by commercially available AA battery.

Metravib Defence aims to develop a new version of its Personal Equipment Add-on for Reactive Localiz...