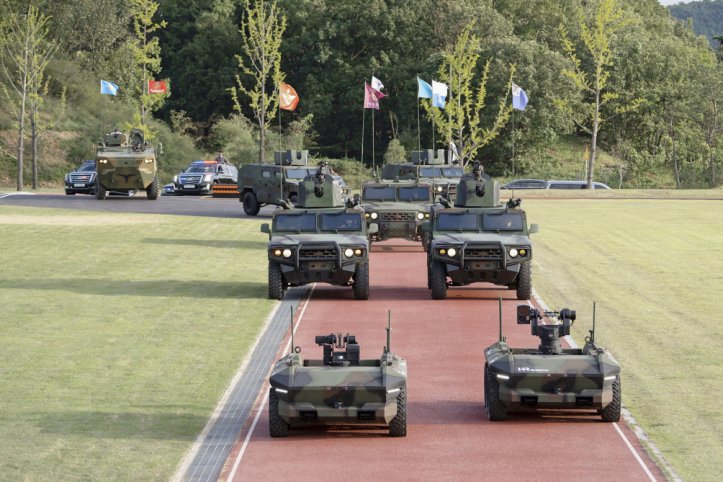 A pair of HR-Sherpa UGVs seen leading a contingent of vehicles during a rehearsal ahead of the 72nd RoK Armed Forces Day celebration. (Hyundai Rotem)

Hyundai Rotem said in a 28 September announcement that two of its HR-Sherpa UGVs were used to lead a column of RoKA and homeland security vehicles – which also included one of its wheeled armoured vehicles (WAVs) – and to support security operations at the venue.

The HR-Sherpa is a 6x6 multirole dual-use UGV that is understood to have a weight of 1,800 kg inclusive of a 600 kg payload. The electrically powered is capable of turning on its axis and offers a claimed endurance of 6 hours when cruising at 5 km/h, although it can also attain respective road and cross-country speeds of up to 40 km/h and 10 km/h. Survivability is enhanced with airless tyre technology, which ensures that the UGV remains mobile despite tyre damage.

The vehicle can be equipped with Hyundai Wia’s Remote Control Weapon System (RCWS) for reconnaissance missions. It can also be configured for other tasks, such as fire support, logistics, medical evacuation, and security.