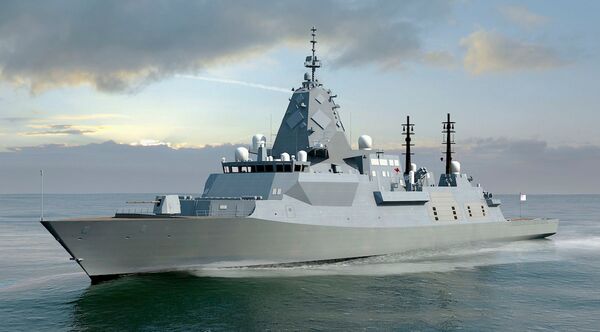 A CGI impression of a Hunter-class frigate is pictured above. Prototyping of the class started in late 2020 and construction is scheduled to start in late 2022. Acceptance into RAN service is expected in the late 2020s. (Royal Australian Navy)

Australia's Minister of Defence, Department of Defence (DoD), and Chief of Navy have combined in rebutting a leaked naval engineering report that has assessed the Royal Australian Navy's (RAN's) nine future Hunter-class frigates as slower and heavier than planned and facing numerous design faults and problems with shipbuilder BAE Systems Maritime Australia.

Details of the classified DoD Engineering Team Assessment report, undertaken in November 2021, were published in the national newspaper The Australian on 1 February, setting out what it described as an array of serious problems with the ‘immature' United Kingdom Type 26, which provides the reference design for the AUD44.1 billion (USD32 billion) RAN Hunter-class programme.

According to the newspaper, the report says inclusion of the US Aegis combat system and the Australian-designed CEAFAR2 phased-array radar in the reference design have pushed the space, weight, power, and cooling margins of the Hunter class to their limits, posing a “significant potential risk”.

The changes have caused serious design issues that have cascaded through the programme, driving up electrical power consumption with “a negative impact on speed and range”, and causing problems with the cooling of the vessel's combat system, the report is quoted as saying.

It also criticises slow feedback and “confusing and incoherent” provision of data by BAE Systems and says the company's design process “does not adhere to normal system engineering practice”.

Australia's Minister of Defence, Department of Defence (DoD), and Chief of Navy have combined in reb...