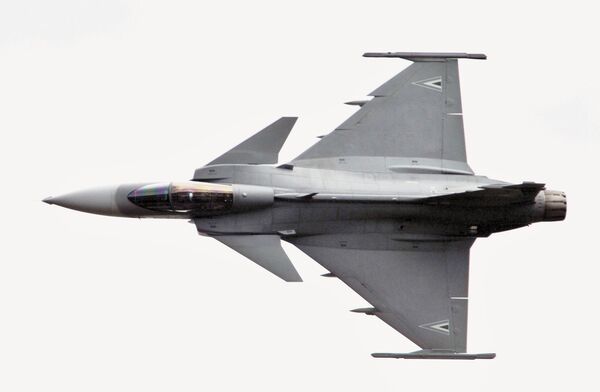 Hungary is to bring its Gripen C/Ds up to the latest MS 20 Block 2 standard, under a deal announced on 12 January. (Janes/Patrick Allen)

Hungary is to upgrade its Saab Gripen C/D combat aircraft to the latest MS20 Block 2 standard, the original equipment manufacturer announced on 12 January.

The Swedish Defence Materiel Administration has concluded negotiations with the Hungarian Government Commissioner Office for the upgrade, which will include a raft of enhancements to the Hungarian Air Force's fleet of 12 Gripen C and one Gripen D aircraft.

“The MS20 Block 2 upgrade brings a number of improvements,” Saab said. “It greatly increases both Gripen's combat and communication capabilities, as well as access to a wide range of weapons that can be integrated on Hungarian Air Force Gripen fighters.”

The work will include an upgrade to the Saab PS-05/A Mk4 radar to improve both air-to-air target tracking range and overall performance, enhanced Link 16 datalink capabilities, as well as installing the latest NATO Mode 5 standard identification, friend-or-foe (IFF) system. MS20 Block 2 will also allow Hungary to choose from a wider selection of weapons, including the Diehl IRIS-T and MBDA Meteor air-to-air missiles, and the Raytheon GBU-49 Paveway precision-guided bomb.

Hungary is to upgrade its Saab Gripen C/D combat aircraft to the latest MS20 Block 2 standard, the o...