The UK Royal Navy (RN) announced on its website on 6 September that its second aircraft carrier, HMS Prince of Wales, left its home port of Portsmouth the day before for its first longer period of time training with F-35B short take-off and vertical landing fighters from the Royal Air Force's (RAF's) 207 Squadron before participating in the multinational exercise ‘Joint Warrior', which is being held off the Scottish coast from 27 September to 4 October. The RN said the F-35 training would “pave the way for front-line carrier operations” and ‘Joint Warrior' would test its “ability to work alongside other naval, air force, and army assets and broader task group operations”. 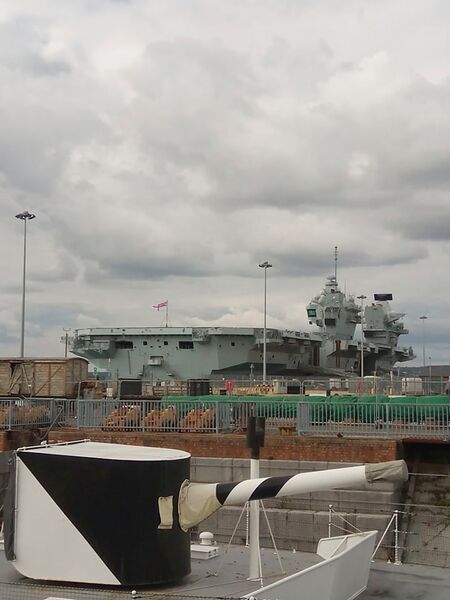 HMS Prince of Wales in Portsmouth on 28 August, eight days before it sortied for its first longer period of time training with F-35B fighters. (Janes/Nicholas Fiorenza)

Embarked on Prince of Wales are four F-35Bs and Merlin helicopters, which will be the first time a fast jet and helicopter air group will operate off the carrier, providing training for pilots, flight deck crew, aircraft handlers, air traffic controllers, and maintainers.

The 700-strong crew of Prince of Wales is benefitting from the experiences of the crew of HMS Queen Elizabeth, which is leading an international carrier strike group in the Far East. Prince of Wales commander Captain Steve Higham said the two carriers “are in constant communication to ensure that any lessons identified by either ship are capitalised upon. Both ships' companies strive to ensure commonality of standard operating procedures for the safe and efficient conduct of aviation at sea, and any changes in Prince of Wales' approach to generating for operations will be as a result of this continuous collaboration at all levels”.

The UK Royal Navy (RN) announced on its website on 6 September that its second aircraft carrier, HMS...