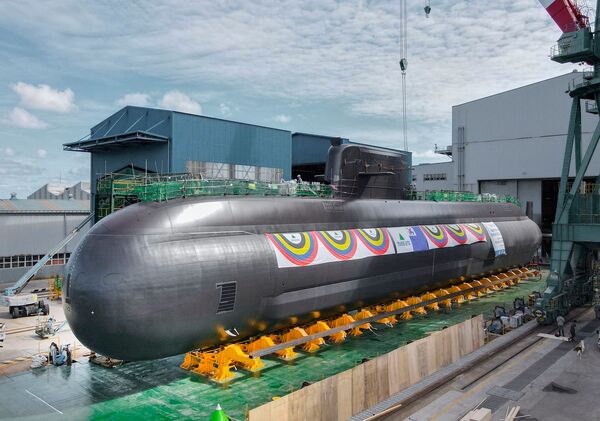 South Korea's HHI launched Shin Chae-h o, the third KSS-III-class submarine on order for the RoKN, in a ceremony held on 28 September at Ulsan. (RoKN)

The event took place during a ceremony held on 28 September at the company's facilities in Ulsan.

Named Shin Chae-ho , the boat is the last of the first batch of KSS-IIIs (also spelled KSS-3s) on order, but only the first of the class to be built by HHI, with the first two constructed by Daewoo Shipbuilding & Marine Engineering (DSME).

South Korea is expected to build a total of nine KSS-III-class boats (three per batch), all of which are expected to be capable of deploying submarine-launched ballistic missiles (SLBMs).

First-of-class Dosan Ahn Chang-ho (SS 083) was commissioned on 13 August: the same day that DSME secured a KRW985.7 billion (USD845.5 million) contract to build the second boat of the second batch.

Equipped with locally made lead-acid batteries and an air-independent propulsion (AIP) system featuring hydrogen fuel cells, Shin Chae-ho is slated for delivery to the navy in 2024 after undergoing a series of trials and evaluations, according to an RoKN statement.

Fitted with noise-reduction technology, the 83.5 m-long submarine, which displaces 3,358 tonnes when surfaced and 3,705 tonnes when submerged, has a stated maximum speed of about 20 kt, a cruising range of 10,000 n miles, and can accommodate a crew of 50, according to Janes Fighting Ships . About 76% of the boat's components were sourced locally, noted the RoKN.